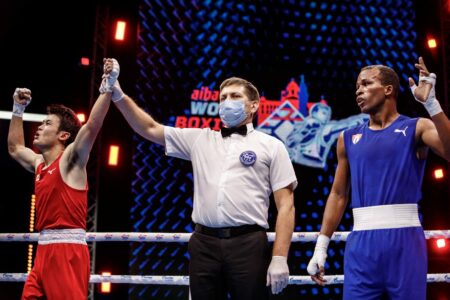 The evening session of the 3rd competition day at the AIBA Men’s World Boxing Championships saw actions for the last 16 at the minimum weight (48kg) where the Asians showed strong performance. The round of 64 was also held in the lightweight (60kg); Japan’s 2016 AIBA Youth World Champion promising Hayato Tsutsumi eliminated Cuba’s star, three-time champion Lazaro Alvarez with incredible performance.

Serbia’s Omer Ametovic claimed two medals during his career at the EUBC Youth European Boxing Championships. The 19-year-old local boxer prepared hard for this event where he can box in front of his family. The Serbian teenager started the first round for the last 16 in high rhythm against Turkey’s Muhammet Unlu who returned to the national team after four years of break. Ametovic is smaller than most of his opponents but his style of boxing is uncomfortable for the boxers and Unlu also could not keep the longer range. The quick Serbian worked hard all of the three rounds and gave it all to win his emotional contest.

Thailand Boxing Federation sent a powerful but mostly young team to the AIBA World Boxing Championships. Their oldest team member is Wuttichai Yurachai who returned to the international events after two years of break. He won the Cologne Boxing World Cup in Germany in April 2019 but he could not compete anywhere due to the pandemic and the lockdowns. The 29-year-old Yurachai trained hard and the outcome of his work was a clear success over Poland’s Jakub Slominski in the first preliminary round of the minimumweight (48kg). The Thai progressed in defensive and tactical skills, therefore, the Polish boxer was not able to catch him in the bout.

Vsevolod Shumkov defeated his US rival in a tight bout

RBF Team Vsevolod Shumkov is a 20-year-old talent who achieved a silver medal at the Budapest 2018 AIBA Youth World Boxing Championships and following his joining the elite age group, he claimed his first national title last month. The Russian met with a young US athlete, Jonathan Mansour who had a longer reach and a height advantage. Shumkov’s movements were excellent in the first round, he felt the distance and landed a few effective punches which delivered an advantage for him. Shumkov had some excellent hooks in the second round but Mansour returned to the match in that period with a strong performance. The final verdict depended on their performance in the last round when Shumkov looked slightly better and won their tight lightweight (60kg) bout.

Slovakia’s Viliam Tanko has 10 years of experience at international competitions, he attended the 2011 AIBA Junior World Boxing Championships in Kazakhstan. The Slovakian moved back to his best category, the lightweight (60kg) and he felt the distance well from the first seconds against Mauritius newcomer Jean Agathe who won only national events in the previous years. The Slovakian counter-attacked the Mauritian boxer effectively and following his performance, he can prepare for the next stage on Friday.

Japan’s Hayato Tsutsumi claimed the gold medal at the 2016 AIBA Youth World Boxing Championships and he won also the ASBC Asian Youth Boxing Championships twice. The 22-year-old Japanese had a tough draw, he had to meet in the round of 64 with Cuba’s three-time AIBA World Champion Lazaro Alvarez. Hayato, whose younger brother Reito is also a member of the national team in Belgrade, found his best rhythm at the beginning of the second round after the equal first. The Japanese talent turned up the heat and caught Alvarez with heavy shots from closer range, therefore, the Cuban lost his rhythm. Hayato Tsutsumi landed a high number of hooks in the third round against the Cuban star and eliminated one of the gold medal contenders in Belgrade.

Round 12: The Bridgerweight division is here to stay! Carlos Cañizales faces Germán Valenzuela this Friday for WBA regional belt