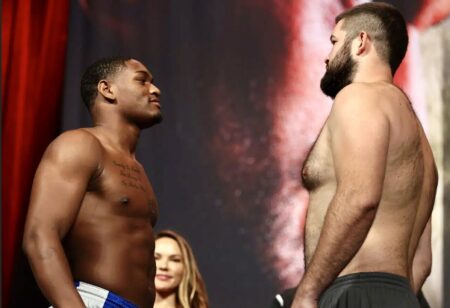 Uprising Promotions heavyweight Vladimir Tereshkin (22-0-1, 12 KOs) is set for his return to the ring tonight, facing Jared Anderson (9-0, 9 KOs) in an eight-round clash of undefeated fighters at the T-Mobile Arena in Las Vegas, Nevada. The bout will be kicking off the PPV portion of a card that leads into the highly anticipated trilogy meeting between Tyson Fury and Deontay Wilder for the WBC and lineal heavyweight crowns.

Tereshkin hit the scales on Friday at 256 pounds, while Anderson weighed in at 240 pounds. Coverage for Fury vs. Wilder III begins at 7 p.m. ET on ESPN2 and FS1, with the PPV getting underway at 9 p.m. ET.

“Vladimir had an incredible camp for this fight, and now he is ready to show the world what he can do,” said Ronson Frank, President of Uprising Promotions. “We have been really happy with the way he conducted himself throughout his preparation for this bout. He has proven to us time and time again that he is willing to make the sacrifices it requires to take his career to the next level. This opportunity is not something he has taken lightly, and we expect to see him get his hand raised at the end of the night.”

After turning professional in 2007 at the age of 19, Tereshkin has remained undefeated over the first 14 years of his career. The Russia native has fought in eight different countries during his pro campaign, including his American debut in 2010 when he dominated Joseph Rabotte in Las Vegas. Tereshkin has stopped his last four opponents, most recently finishing the previously unbeaten Francisco Silvens in Jamaica prior to the pandemic.

“I’m very ready to fight on this huge event,” said Tereshkin. “I’m happy, and I know a lot about my opponent. I’ve done great preparation, and we’re going to win.”

Tereshkin knows the hard-hitting Anderson will be the toughest test of his career to date, but he is confident that he has the tools to help him secure the victory on Saturday night.

“My opponent is a strong fighter, but I’m prepared as well as I ever have been,” he confirmed. “He’s going to have to be ready for what I bring to the ring, just like I’m going to be.”

Tereshkin stands 6-foot-6 and has the versatility to box from both the southpaw and orthodox stances. Over the first few years of his career, he consistently turned the heads of two of the most dominant heavyweights in recent boxing history, working as a chief sparring partner in world championship camps for International Boxing Hall of Famers Vitali and Wladimir Klitschko.

A decorated amateur fighter, Tereshkin eclipsed 200 wins and was a repeated medal winner and champion in both Russian and international competitions. He won his first national championship when he was just 15 years old, and he carried that momentum throughout a highly successful amateur campaign that led to worldwide notoriety.

Jared “Big Baby” Anderson will make his pay-per-view debut in his 10th professional fight on the all-heavyweight undercard of Fury vs. Wilder III at T-Mobile Arena in Las Vegas on October 9. Anderson will open the PPV broadcast in a showdown with veteran Vladimir Tereshkin (22-0-1) of Russia in what could be the toughest test of Anderson’s career.

Anderson was just eight years old when Tereshkin turned professional in 2007 but his opponent’s experience doesn’t discourage the talented American heavyweight who has never been one to shy away from a challenge.

The 21-year-old former amateur standout has caught the eye of many in the boxing world with his successful run in the Top Rank bubble and the valuable sparring work he gave Tyson Fury ahead of his second fight with Deontay Wilder. He is now ready to step into the spotlight on October 9 and impress once again.

Anderson was not deterred by the fight postponement and has remained focused and in the gym since the card was delayed in July. He often works with and alongside fellow top athletes and he had the chance to do so while training in Houston, working out with former world title contender Bryant Jennings and fellow heavyweight prospect Efe Ajagba.

His ability to remained focused on his craft and prepared for any challenge has served him well throughout his professional career. While most boxers struggled to remain active during the early days of the pandemic, Anderson scored five victories in the Top Rank bubble.

Since entering the paid ranks in October of 2019, Anderson has not gone to a decision, scoring stoppage victories in all nine of his pro fights.