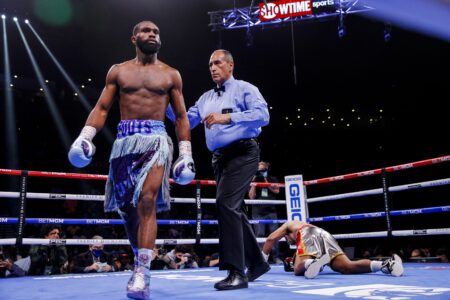 “It was a good knockout,” said Ennis. “You know me, I wanted to show my skills and abilities. I’m just thankful for this opportunity. Now it’s on to the next. Let’s get the big names.”

With the dominating performance, the Philadelphia-native Ennis became the first fighter to stop the durable Dulorme since Terence Crawford accomplished the feat in 2015. Ennis found his opening with a big overhand right that caught Dulorme and sent him down for the first knockdown.

“We got it early, that’s OK by me,” said Ennis. “We don’t get paid for overtime. I knew it was over after that first knockdown. I just had to take my time and not rush anything. Everything I did today we worked on in the gym.

Dulorme was able to get to his feet, and tried to turn the tide throwing big power punches after the knockdown, but was quickly met with a punishing one-two punctuated by a right hook that sent him down again. Dulorme was unable to beat the count as referee Mike Ortega halted the fight just 1:49 into the round.

“I’ve been ready for a world title two years ago,” said Ennis. “I want the top guys: Errol Spence Jr., Yordenis Ugas, Shawn Porter, Terence Crawford, Keith Thurman. I’m ranked No. 3 in the IBF, so Errol Spence Jr. is who I want next.”