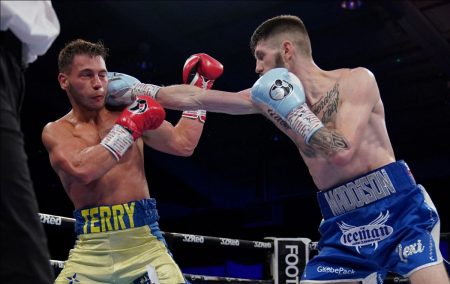 It was a successful and spectacular second defence of his coveted title for the Doncaster man who has his eyes firmly fixed on a world title tilt.

Le Couviour came perilously close to being counted out in just the second round when Cunningham unloaded a vicious left uppercut to the body that floored the Frenchman, who got up at nine.

Le Couviour was down again in the third as Cunningham was exploiting the weakness at will and the 16-0 man was being outclassed by his more experienced opponent, although he managed to compose himself a little in the fourth.

Cunningham pummelled the body again in the fifth and Le Couviour looked vulnerable once more and it was all over in the sixth when another left under the ribs saw Le Couviour wanting no more and the fight was waved off after 53 seconds of the round.

Nathan Heaney extended his unbeaten record to 15-0 with a successful defence of his IBO International middleweight title against the dangerous Diego Ramirez.

Heaney was felled by a dynamite left from Ramirez near the end of the first round after what was a controlled beginning from the Stoke favourite. It was quickly clear that a looping left was the danger shot from the Argentinean and Heaney would have to be on his guard.

Heaney regrouped and largely dominated the second, putting the 27-year-old under severe pressure towards the end of the round. Heaney applied caution as he worked his way through the third, patiently landing the telling blows.

There were warning signs again for Heaney in the fourth as Ramirez enjoyed some success and the 32-year-old was strongly advised by his corner not to get involved in a shootout.

Heaney was snuffing out the threat and coming up with good work of his own as the final rounds approached. He asserted control over proceedings and just needed to stay out of the way of wild swings.

Andrew Cain took all of 10 seconds to extinguish the threat of Pablo Ariel Gomez to win the WBC International Silver title at super bantamweight. A clubbing right hand poleaxed the Argentinean and, after John Latham’s count, the official time was given as 19 seconds.

“I was just thinking seek and destroy,” said Cain in the aftermath of his eighth stoppage in nine unbeaten fights. Cain is in line to face the winner of the forthcoming British title battle between Marc Leach and Liam Davies.

Eithan James passed the first stern examination of his young career by outsmarting the rough and always ready Ben Fields over eight. The 21-year-old remained composed against the robust Birmingham man with a reputation for removing the 0 from the records of prospects.

The classy James from Northampton picked off his more experienced opponent over the opening and middle rounds before Fields finally managed to get up closer and enjoyed some success.

James did not shy away from battle and will benefit from the experience with an English title eliminator looming. Despite taking a booming shot to the temple in round eight, James prevailed and moved to 8-0 via a 78-75 scoreline from referee Michael Alexander.

A lively scrap was had between Worcester welter Owen Cooper and his game opponent Richard Helm over six. The first round brought about an entertaining trade-up between the pair before Cooper established a rhythm and began to impose himself on the Rochdale man.

Cooper, just 21, was dominating by the fourth round and punished the older man to the body, which took away the ambition of the 35-year-old, but he wasn’t to surrender. Helm rallied in the final round, but Cooper moved to 6-0 with John Latham’s scorecard reading 59-56 in his favour.

Liverpool super bantamweight Brad Strand, now 7-0, displayed a combination of skill and spite to overcome the previously 11-1 Ally Mwerangi in a biggest career test. After plotting his way through most of the first four, Strand rocked his Tanzanian opponent at the end of the round.

The 25-year-old followed up in the fifth with a stinging onslaught and kept Mwerangi at bay with pockets of speedy and smart work. Mwerangi was docked a point in the final round for use of his head and the scorecard read a convincing 60-53 margin for the Everton Red Triangle product.

Earlier on, York welterweight George Davey was judged to have drawn with Serge Ambomo, with the score being marked up at 57-57.

In the opening fights of the evening, Bradley Thompson – the flyweight brother of Liam Davies – registered his fourth win as a pro with a third round stoppage of Francisco Rodriguez. The Spaniard was saved after 1.16 of the round.

Promising welterweight powerhouse George Bance, now 3-0, scored his first win via KO, stopping Des Newton after 1.48 of round two. At super lightweight, Telford local Macaulay Owen overcame Liam Richards with a shutout 40-36 victory on the cards to move to 3-0 as a pro.