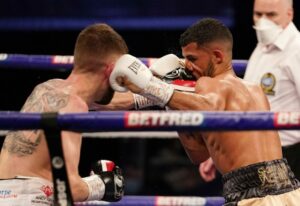 Yafai was down in the second, fourth and sixth rounds and spent the rest of the fight desperately trying to salvage his belt, but to no avail.

“We’re buzzing,” said Cunningham. “We’re from a little town called Doncaster. We’ve got a British, European and World Champion – that’s some doing that. In at three weeks’ notice – I won my second Commonwealth Title at three weeks’ notice. They tried catching me out tonight, I don’t care what anyone says – that’s what they’ve done.

“I’ve stayed prepared, stayed disciplined and dedicated. This is what happens when you stick to it. I was in this venue last time I had a big fight against Michael Conlan. I pushed Michael Conlan hard. I had to grit in late on tonight – he hurt me a few times to the body. I’ll never quit. It’s my boxing ability that sets me above the rest. I’m an awkward tall southpaw.

“I said I knew I had the tools to do it. I said I’d have done a better job if I had more notice but to be fair, I dropped him three times and it was quite comfortable really. I knew to keep calm and carry on what I was doing. I stuck to it and this is my reward. I made a lot of people in Doncaster a lot of money tonight.

“I showed my class, I was levels above him in terms of boxing ability. Usually you get a good ten weeks’ notice for a European Title fight – it was the biggest fight of my life. I’ve been out of the ring since February last year. Tonight was just my night, I knew I was all wrong for him.”