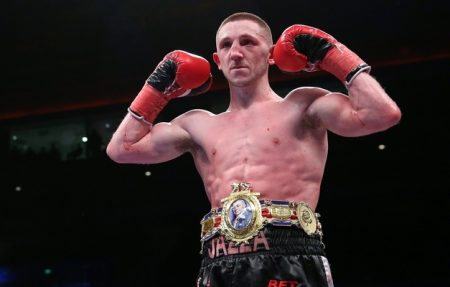 Featherweight contender Jazza Dickens has told world champion Leigh Wood he is running out of options for his next title defence.

The Liverpool puncher has reminded the WBA title holder he is ready and waiting to challenge him and that a fight between the pair would be “easy to make”.

Wood will not rematch Michael Conlan next and there has been no further update from the WBA since their 30-day deadline for the Nottingham man to negotiate a fight with Leo Santa Cruz, has passed.

Dickens delivered a statement of intent last month when he stopped former European champion Andoni Gago inside five rounds at Probellum Liverpool and the 31-year-old has continued to turn the heat up on Wood.

“Leigh Wood or Josh Warrington, they are not hard fights to make, and they are looking for opponents.

“Michael Conlan said in an interview that he was fighting someone else next and wasn’t going to be fighting Leigh Wood, so that’s not happening.

“If you had seen the fight between me and Leigh Wood then you know people would be happy to make that fight.  It would be a fantastic fight.”Dickens defeated Wood on points after 10 rounds in February 2020 and is confident of the same outcome – if the WBA champ accepts his offer.

“The only reason you should get a shot at a world title is if you’re good enough and I know I’m good enough because I’ve beaten the current world champion and I believe I’ll beat him again,” Dickens said.