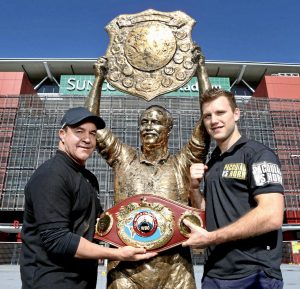 Jeff Fenech has predicted that Jeff Horn will defeat Tim Tszyu when they clash on Wednesday.

Australians Tim Tszyu (15-0, 11 KO’s) and former WBO welterweight champion Jeff Horn (20-2-1, 13 KO’s) go at it this week with both confident of beating each other. Tim is the son of legend Kostya Tszyu whilst Horn is best known for upsetting Manny Pacquiao in 2017 (Pacquiao’s last defeat).

“I see Jeff Horn winning and it could be by stoppage,” Fenech told the Daily Telegraph. “If he can beat Tim Tszyu to his punches like the punches he hit Michael Zerafa with, he’ll knock anybody out.

“…Jeff knew exactly what he had to do early in his last fight against Zerafa, and he needs to do the same to Tim, let Tim know that he’s there and needs to respect him. I really do believe Jeff Horn will win the fight.

“People are saying Jeff doesn’t have the hunger anymore, but he does have that hunger, he wants to prove to Australia and the world he has what it takes. Beating Tim Tszyu will give him that taste again.

“I learned something from Emanuel Steward. He knew what opponents you should fight and which ones you shouldn’t, and at this stage, I wouldn’t be telling Tim that Jeff Horn is the perfect opponent.”

Josh Taylor to Return Against No.1 Contender Apinun Khongsong on September 26th Andy Ruiz – “I Was So Happy That Whyte F**king Got His Ass Knocked The F**k Out”