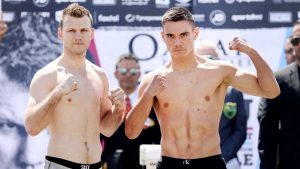 Both fighters made weight paving the grudge-match for Wednesday night. Horn arrived late, reportedly making a trip to the sauna before arriving finally weighing 153.4 pounds. Tszyu is in his first fight since December hit the scales at a near-career lightest at 152.3 pounds.

A dispute has arisen over the judges assigned to judge the contest. Allegations were made by Horn’s trainer team that judge Chris Condon was a former team member of Tszyu’s and it has also come to light that Philip Holiday (former lightweight champ from the 90’s) and now an active ringside official, openly discussing the possibility of Tszyu winning the fight via cuts.

One senses that this is just the start of what will be controversy filled.

Horn said per the Australian Associated Press “I think it’s silly. I don’t know if he’s lying, but telling me he’s only 70.5kg … I’ll be throwing him around like a rag doll if he’s that light.

“I don’t want to ever say I’m going to knock a guy out. I’ve got a lot of respect for his family. His dad’s an absolute legend. … It’s going to be a very tough fight and an even tougher fight for Tim Tszyu.”

The bout will air live on Australia Main Event as well as on ESPN+ in the United States (5:00 am ET). A socially distanced crowd of approximately 16,000 is expected.