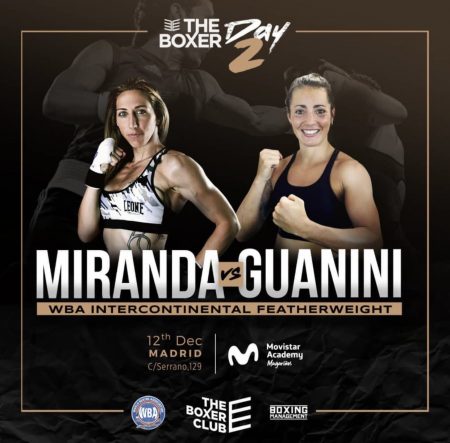 Increasing the competitiveness of the 126 division, next December 12 there will be an attractive female duel at the Movistar Academy Magarinos in Madrid, Spain. There, the local Jennifer Miranda and the representative of Argentina Jorgelina Guanini will fight for the World Boxing Association Intercontinental Featherweight belt.

Miranda has had an extensive and outstanding amateur career. She achieved great popularity after her acting participation in the successful Netflix series La Casa de Papel. Born in Cádiz, Spain, she is ranked number 8 in the WBA women’s world ranking. She debuted as a professional boxer in February 2018 and remains undefeated in 5 submissions with 1 knockout.

For her part, Jorgelina “Jota” Guanini, was born in Necochea, Buenos Aires, Argentina, country where she has made most of her career. For 2017, she made a fight against Davinia Perez in Spain and then for 2019 she decided to go to settle in European lands. She began her adventure with camps in Italy and Spain while on the way she had the chance to fight Rachel Ball in the United Kingdom where she left a great impression.

Jota was IBF super flyweight world champion, a title she achieved in September 2018 in what was a bloody and explosive fight against her compatriot Debora Dionicius. She will arrive before Miranda with a solid experience that she managed to accumulate in 9 wins, 2 losses and 2 draws. Both fighters will be looking for the intercontinental belt of the pioneer organization.