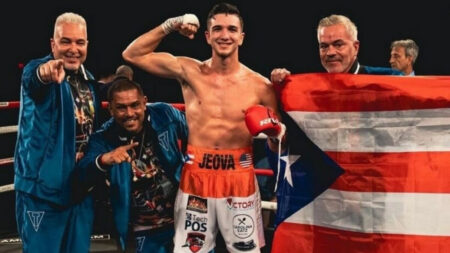 Hailing from San Juan, Puerto Rico and residing in Orlando, the popular 22-year-old is 9-0 with 3 victories by knockout. Six of his nine professional fights took place at the Caribe Royale including his most recent bout, a unanimous decision over Ramon De La Cruz Sena.

Based in Miami, FL by way of the Bahamas, Williams is 6-1 with 5 KO’s. On September 17, Williams scored a 2nd round knockout over Daniel Arriaga in Tampa, FL and is currently riding a five fight win streak.

“Estella-Williams is a very good matchup,” said Amaury Piedra of Boxlab Promotions. Jeovanny has the height and reach advantage plus he’s got a large fanbase here in Central Florida. Williams is very strong and has the kind of power to end a fight at any time. I give credit to both guys for being up to the challenge and there’s a good chance this will be fight of the night.”

Tickets from $40 are on sale at Ticketmaster and will also be available at the Caribe Royale box office on fight night. Those unable to attend can watch the card live on Fite.Tv.

Doors open at 5 pm and the opening bell will sound at 6.