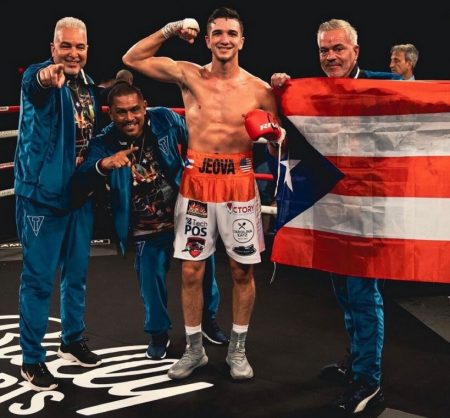 Welterweight Jeovanny Estela (9-0, 3 KOs) was victorious against Ramon De La Cruz Sena (23-34-3, 13 KOs) this past Sunday at the Caribe Royale Orlando, in Orlando, Florida, scoring a unanimous decision. The 6-round bout was promoted by Boxlab Promotions.

Estela controlled the action throughout this fight by keeping his distance with a long jab and using lateral movement to get his shots off. This would Estela’s third 6-round bout, and the young 22-year-old feels his progress is coming along as planned.

“Every fight I’m getting better at controlling my breathing as I’m getting used to pacing my self as I move up in competition,” said Estela, who fought for the sixth time in his hometown of Orlando, Florida. “I’m also learning how to break down my opponent mentally with my jab. I believe as my career develops, I’ll be getting more knockouts as I move to eight and ten round fights.”

Estela should be on a two-fight knockout streak, but his fight before his last bout, a technical knockout, saw his opponent get disqualified for excessive holding. Standing six-feet tall, Estela has the size and power to become a name in the welterweight division.

“Jeovanny is coming along great, and he’s learning how to become a better pro boxer,” said Mike Leanardi, CEO of FightStars, who manages Estela. “He’s making a name for himself in his local market of Orlando, Florida. He’s become a fan favorite in his hometown. We will continue to fight him in Orlando and build on the momentum he’s mounted. His fanbase is getting bigger with each fight.”