Jermaine Franklin: ‘I’d beat AJ but I have to KO Dillian Whyte first’ 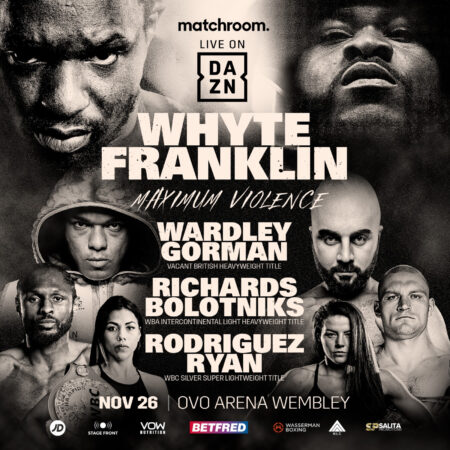 Lord Ping caught up with unbeaten prospect Jermaine Franklin this morning as he prepares for his heavyweight showdown with Dillian Whyte on November 26.

Jermaine Franklin said: I have joined Tyson Fury’s camp and he has advised me on how to humble myself

“I have joined up with Tyson’s camp. I tell you I learned a lot on the first day. I realized what many do not believe or want to believe – I can compete with the Tyson Fury’s of the heavyweight division. He is the best, but I believe I have skills and talent to be a champion also. Being in his camp, in this brief period of time, I have learned how to run a camp, how to prepare, and also humble myself to ask other boxers about how they are successful. Yes I will ask and have asked Fury about how to beat Whyte.”

Jermaine Franklin: Sparring with Fury has shown me I can compete with the best heavyweights in the world

“It was pretty much general advice [on how to beat Whyte] – work your game plan. As I continue to spar with him in the coming days he will give me more advice on what to do. I will say this, Fury and I are pretty much alike. We love to joke around; we love boxing and we have big personalities. Sparring with Fury so far has shown me I can hang with him in the ring. I know some hater out there will say ‘yeah right’ but I know now I have the skills to compete and win at that level. Check back in a week and I will let you know what other secrets Fury gives me about Whyte.”

Jermaine Franklin: I would love to fight Anthony Joshua and I’d beat him if I did

“I’m focusing on Dillian Whyte right now. I will address that if that happens. Of course I would love to fight Joshua or someone on that level. I want to show I’m the best by beating the best. If Joshua and I get in the ring, I would love that. I respect his game but I feel I will win.”

Jermaine Franklin: I will knockout Dillian Whyte but I won’t rely on my ‘special punch’

“November 26, we have some surprises for Dillian. But I will say this one thing, the uppercut is a special punch but I am not going to just put my faith in that punch. My coaches have a game plan in place. I plan on winning, and I hope by knockout. It’s time for Dillian to pass the future on to me.”