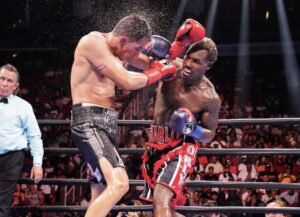 Jermall Charlo (32-0, 22 KOs) controlled the fight for long stretches, as brave Juan Macías Montiel (22-5-2, 22 KOs), withstood an above and beyond welter of firepower, fighting back with southpaw gusto throughout.

It could have over in the fifth when Jermall wobbled Juan with a huge right, backed him up on the ropes and unleashed a cascade of punches, but Juan came back with a fierce exchange leading to the bell, fully living up to his famous name.

Jermall`s Coach Ronnie Shields was advising him to use his jab. But in spite of his exceptional, diverse and resourceful boxing ability, Jermall`s right eye was swelling from an increasing amount of left hooks which were piercing his guard.

Two well timed right crosses wobbled Juan in the twelfth. His answer was to go to the body and slam one big right to the head. Gangling and unconventional, his superb physical condition and true grit kept him in the fight and competitive, yet outgunned. Both men who were very tired from their titanic efforts, smiled and embraced. It takes two to make a classic…or even tango!

Jermall proudly put on the WBC shirt, our President Mauricio Sulaiman handed him, as a mantle of deserved victory. He`d really earned it and the WBC Freedom Belt, fulfilling his promise to accomplish a show to remember in front of his cheering fans. A triumph to savour for many years.

And with this magnificent triumph, Jermall won that Freedom Belt, which the WBC created as a special recognition to commemorate “Juneteenth”, a date who the slavery was abolished in the state of Texas.