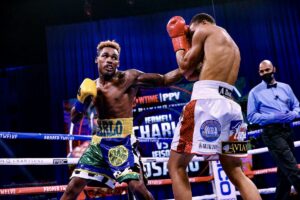 Fight Notes: Rosario down in round one & six. Time of the stoppage was 0:21 of round eight with Rosario hurt from a jab to the stomach.

“I definitely proved that I’m more than just a puncher, but I also showed again that I’m a big puncher. I’d give myself an A tonight. I stuck to my game plan and listened to my coach. Everything we did in camp, I used it in this fight. I pushed myself the whole way through training camp. It’s been a journey for me. I’m bringing the straps home to my family like they told me to.

“I knew that he was going to keep coming after the first knockdown. He kept pressing for four or five rounds until I floored him again. I’m growing and learning that the knockout just comes. I know that I have explosive power in both hands. I utilized my jab more than any other punch in this fight and that’s what got me these straps.

“Rosario hits hard, but if you have to know how to wear a fighter down. That’s how you take the power out of him.

“I think some of the previous punches I landed hurt him before the jab. The body shot that landed just hit the right point. I wish him well. I give any man who steps into the ring respect. I hope he recovers and bounces back.

“It’s Lions Only forever. We’ve been doing this for a long time. Dreams do come true. This is a part of my dream and a part of my destiny. I’m satisfied and I’m happy.