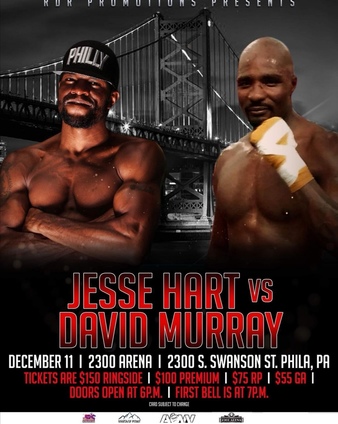 RDR Promotions Back at the 2300 Arena in Philadelphia with Jesse Hart against David Murray in Headline Bout on Saturday, December 11th

Two-time world title challenger Jesse Hart will be back in action on Saturday, December 11th at the 2300 Arena when he takes on David Murray in the eight round super middleweight main event.

Hart of Philadelphia has a record of 27-3 with 21 knockouts. The 32 year-old has twice battled for the super middleweight championship of the world only to fall just short to Gilberto Ramirez in fights that were decided by just a couple of points.

Murray of Wilmington, Delaware, has a record of 10-2-1 with six knockouts.

Murray is an eight-year professional, and is riding a three-fight winning streak with his latest win being a six-round unanimous decision over Austin Marcum on February 29, 2020 in Hockessin, Delaware.

A massive undercard features RDR Promotions fighters, Shynguskhan Tazibay (9-0, 2 KOs) of Washington, DC takes on an opponent to be named in a six-round middleweight fight and lightweight Isaiah Johnson (3-0, 3 KOs) of Sicklerville, NJ against opponent to be named.

Romuel Cruz (6-0-1, 2 KOs) of Philadelphia takes on an opponent to be named in a super bantamweight fight.

Nelson Perez (5-0, 2 KOs) of Marlboro, Massachusetts fights an opponent to be named in a lightweight contest.

Featherweight Felix Parrilla (2-0, 2 KOs) of New Haven, Connecticut will take on an opponent to be named.