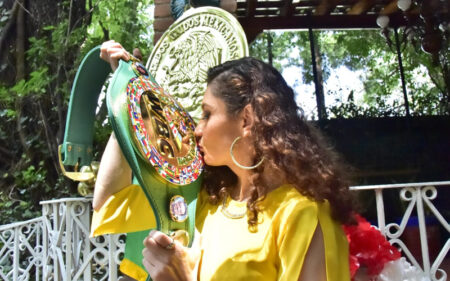 Comeback kid, Jessica “Magnifica” Gonzalez who returned to the ring after a three-year absence, to win the World Boxing Council Interim Bantanweight title, is now aiming for the stars, seeking a striking match with Absolute Champion Yulihan Luna.
Jessica was the guest of honour at the WBC Martes a Cafe in Coyocan, Mexico City where she was presented with the Green and Gold Interim Belt by World Boxing Council President Mauricio Sulaiman and of course her very own Mum Carolina Prieto.
Elegantly attired in yellow, Jessica won the accolade by going all the way to the RCC Boxing Acadamy in Ekaterinburg, Russia and defeating previously unbeaten Tatyana Zrahevskaya, by split decison, with a magnificant display of controlled boxing.  Quite a journey via the Netherlands and Poland to reach this “Steppe!”
In her previous fight at York Hall, Bethnal Green, London, she had lost a UD, four divisions higher for the vacant WBC Silver Lightweight Title against the much bigger and naturally heavier Chantelle Cameron!
Talking in English Jessica, who`s also a university educated Administrator in Companies, modestly said: “I`m very glad a grateful to have this boxing opportunity in my life. I can hardly believe it. It`s absolutely great!  I was going through a rocky moment, because I was almost retired from boxing. But now I`m a champion all over again, and I wouldn`t change anything, for this extraordinary moment.
“Fighting Chantelle prior to this was quite a preparation. She was unbeaten with seven fights, including five KO`s. The fight was offered to me, and I accepted, but it was a fight for survival, with me doing my best. Chantelle was very hard, as she was bigger and more robust than me. But I thought if I can fight her, and then can go on and defeat Tatyana! I have matured a lot and with experience against fighters who are bigger than me. Now, I feel stronger and more mature in my body as well as my mind.
“The gameplan strategy against Tatyana was to maintain distance using my left jab and hitting hard with straight rights, plus a lot of punches to the body.  That was the key to victory.”
In 2014 Jessica defeated Yulihan Luna by UD. Yulihan has since become the Absolute Champion, and Jessica absolutely wants the opportunity of a rematch.  Jessica`s assessment is: “Yulihan is a little taller than me.  But I can defeat her again by being quicker around the ring. She is not very quick, but believe me, she hits hard!  So I have to work hard, in order to be faster than her.”
Jessica also praised her Coach Raul “Chamaco” Lopez, who received the WBC wide and ample Green and Gold Trainer`s Belt, for his superb and astute directed efforts. As to whether she can go all the way and become Absolute Champion, Jessica smiles and replies: “Yes…I must!”