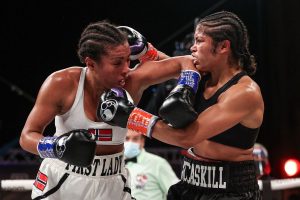 McCaskill, a 6:1 underdog, in beating the then unbeaten Braekus has now won the undisputed female welterweight championship. The win has upset the plans of Braekhus in attempting to break Joe Lois’s record of title defenses that stood at 25.

McCaskill took the early rounds bu Braekhus came into it at the halfway stage, seeming to do enough to take the decision. It was not enough with McCaskill winning the majority decision by scores of 95-95, 97-93, 97-94.

Madrimov appeared to knockout Walker in round nine but referee Gary Ritter ignored the left hook that seemingly landed and ruled that Madrimov had indeed struck Walker with his shoulder that led to the knockdown. Ruling it then a slip, Walker had five minutes to recover in which he recuperated enough to continue. Walker was dropped again in round twelve with what the referee deemed a low blow so deducted a point from Madrimov.

They both came out strong with bad intentions from the opening bell. The unbeaten Ababiy soon gained control of the fight and continued to do so winning by scores of 59-55, 59-55, 58-56.

Campos was a late substitute and saved the show but showed little resistance as Giyasov delivered a body shot in the third round that finished him. Time was 3:00 at the end of the round.

The event was held outside in the streets of downtown Tulsa, Oklahoma.