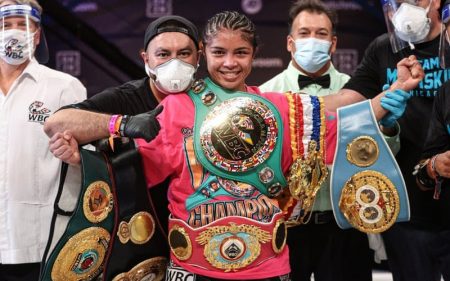 Undisputed world welterweight champion Jessica McCaskill, will be defend her titles against Canadian challenger Kandi Wyatt (10-3-0, 3 Ko’s), in a special attraction this Saturday, December 4, at the MGM Grand from Las Vegas, Nevada.

Canadian Kandy Wyatt will be the opponent of the undisputed welterweight champion, Jessica McCaskill, once the challenger Victoria Bustos could not travel to the United States due to some paperwork.

Jessica McCaskill (10-2 3 Ko’s) successfully defended her 147-pound world belts against the legendary Cecilia Brækhus, in a rematch with the Norwegian-Colombian, last March in Dallas, after giving Brækhus her first loss in professional boxing in August 2020 in Tulsa, Oklahoma.

“CasKILLA” became a two-division queen when she first defeated Brækhus as the American moved up to welterweight after fighting in super lightweight. The 37-year-old fighter appears to be in the prime of her career and intends to continue on that path.

Wyatt has been a world challenger on several occasions and although she is not going through her best moment, she wants to give a blow on the table and get back on track in the best possible way with a big win in this fight. The 30-year-old fighter will be making her third title fight and wants to achieve success after having failed in the first two.

The card, which is promoted by Matchroom Boxing, will be broadcast on DAZN.