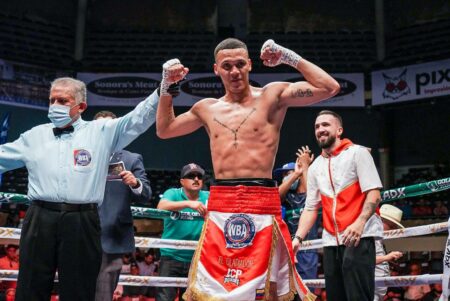 Jesus Correa gave a demonstration of strength in Aguascalientes, Mexico, and defeated Mexican Jesus Acosta by technical knockout in the sixth round to win the World Boxing Association (WBA) Fedecaribe Super Welterweight belt on Wednesday.

The Venezuelan brought out his best power punches and made it clear from the opening bell who was the strongest in the ring. Correa knocked his opponent down in the first round with a right to the head and from then on showed his dominance at all times.

Although Acosta was brave and aggressive, he could not find a way to get inside the visitor’s humanity and was taking punishment as the rounds went by.

Correa connected good hooks to the liver area and combined them with punches to the face but also could not get Acosta in trouble again, who kept looking for a way to change the course of the fight.

In the sixth round, Correa came out with a different attitude and determined to finish the fight. He considerably increased his punch volume and after several power punches he sent Acosta to the canvas again. The Mexican got up but the Venezuelan got on top of him and forced the local corner to throw the towel into the ring for the third man in the ring to stop the actions.

Correa got his 14th career victory, all wins by knockout, while Acosta dropped his record to 15 wins, 4 setbacks, 1 draw and 10 knockouts.