Jimmy Burchfield’s Honored With Belt For ‘Relentless Will’ in Boxing 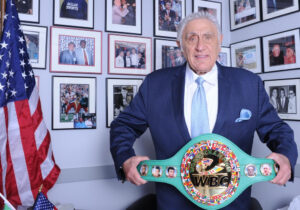 The “hardest working promoter in combat sports,” an eclectic personality in and out the ring, father figure to fighters young and old, and a spirited ambassador for women’s boxing – Jimmy Burchfield Sr.’s list of accolades has grown exponentially over the course of his marvelous, five-decade career.

As he closes in on 30 years as a licensed promoter, the World Boxing Council is paying Burchfield the ultimate honor, awarding the CES Boxing and CES MMA president with its Green and Gold WBC World Champion Belt as part of a Lifetime Achievement Award to recognize his vast contributions to the sport.

“We are honored to present the WBC Green and Gold belt to ‘Uncle Jimmy,’ as he is a champion of life and has dedicated so many years to change the lives of many fighters through his relentless will to promote our sport,” said WBC president Mauricio Sulaiman. “He is an inspiration to many by living a meaningful, successful life.”
“My relationship with the WBC, starting with the late, great Jose Sulaiman and continuing with his son, Mauricio, spans several decades, so to receive this award is a tremendous honor,” added Burchfield. “I am incredibly humbled to be recognized by a sanctioning body that has crowned so many noteworthy champions throughout boxing’s illustrious history. I will cherish this for the rest of my life.”

Known affectionally throughout the sport as “Mr. B,” Burchfield first became involved in boxing as a judge, traveling internationally to score world title bouts in Sicily and Paris. As a promoter, Burchfield guided five-time world champion Vinny Paz, promoting his 50th and final win, and launched the careers of many of the northeast region’s greatest fighters, including “Sucra” Ray Oliveira, Peter Manfredo, Scott Pemberton, Matt Godfrey, and former U.S. Olympian Jason “Big Six” Estrada, among others.

The tradition has continued into the new millennium, too, as Burchfield is the only promoter in the world to boast two reigning WBC Youth world champions, including undefeated lightweight Jamaine “The Technician” Ortiz of Worcester, MA, who recently dazzled in front of a worldwide audience on the undercard of the Mike Tyson-Roy Jones Jr. showcase in November. At 14-0, Ortiz is on the fast track to stardom and, perhaps, a shot at a world title, continuing Burchfield’s legacy is one of the sport’s top talent evaluators.

After promoting his first event in 1992 at the Rocky Point Palladium in Warwick, RI, Burchfield continued to develop champions well into the 21st century and earned several noteworthy awards, including the NABF Promoter of the Year in 2004 in addition to his 2011 induction into the Connecticut Boxing Hall of Fame. Burchfield also promoted Oliveira’s epic 2001 showdown against Ben Tackie at Foxwoods Resort Casino, which set a modern-day CompuBox record for most punches thrown.

As the landscape of combat sports began to change, Burchfield adapted, making history in 2010 with the launch of his mixed martial arts division, CES MMA, and promoting Rhode Island’s first sanctioned event later that year at Twin River Casino Hotel. Years later, he continued his reign in the northeast by guiding hard-hitting Polish heavyweight Mariusz Wach to the top of the division, culminating in a world-title showdown against Vladimir Klitschko in Germany. His development of Philadelphia lightweight “Hammerin'” Hank Lundy led to Lundy’s No. 1 world ranking and eventual world title shot against pound-for-pound king Terence Crawford at Madison Square Garden in 2016.

The history and pageantry of the WBC’s infamous green and gold belt is undeniable; the modern-day design first launched in 1976, the second generation of championship belts presented the WBC and the first of its kind with the green strap and gold emblem. The late, great WBC president, Jose Sulaiman, designed the second-generation belt, which was worn by the likes of Larry Holmes, “Sugar” Ray Leonard, and Alexis Arguello, among others. Today’s fifth-generation belt features the images of Jose Sulaiman and pound-for-pound great Floyd Mayweather, an ode to the sport’s most important personalities.