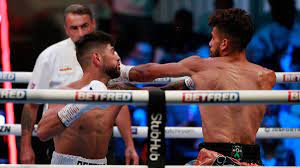 Joe Cordina blew away Chicago’s Joshuah Hernandez inside the opening round to progress to 13-0 (8 KOs) and continue his pursuit of a World Title opportunity.

‘The Welsh Wizard’ was intent on causing damage from the opening bell, landing hurtful shots early on before dropping Hernandez with a stunning right hand that he never recovered from.

“Chris Colbert went eight rounds with Hernandez and what I watched of it, it was quite a tough fight for him,” Cordina told Matchroom. “I watched that fight and a couple others of Hernandez and me and Tony came up with a game plan. We were going through in the changing rooms, and it came off a peach.

“I had to prove a point, I said in an interview earlier in the week that I don’t take criticism from people I wouldn’t go to for advice. I don’t really value many people’s opinions so yeah, it’s one of those things, you’re going to get people criticizing and it’s whether you take it onboard or not. A lot of people didn’t take into consideration that I’d been out the ring for 16 months, had an operation of my hand, we proved the point tonight and got him out of there early on.

“I always look to just get the win, box, if the knockout is there, I’ll take it. As soon as he threw his first jab, I knew he wasn’t going to catch me with that, my sharpness of feet and head movement would get me out of trouble. I started putting my lead hand downstairs and whipping the right hand over the top and I caught him the first time, I knew he was a little bit wobbly. I didn’t want to rush in and try and get him out of there straight away, I knew if I could catch him twice with it there’s going to be a third time and I did exactly that. We got him out of there in great fashion.

“I was watching Fight Camp last year and there was no crowd, but even when there wasn’t a crowd it felt like there was a massive atmosphere. When I saw the first Fight Camp week at home, I thought, ‘oh my god I’m fighting there in two weeks, it’s going to be amazing’. I’m glad that I’m able to tick it of my list now.

“I know people say it but if you speak to my S&C coach and Tony this was probably one of the best camps I’ve ever had. That’s with the boxing, plus my S&C, everything just came together. Don’t get me wrong I had to be at home for my new-born son but everything’s coming together now. I’m glad I got the win tonight in great fashion and now it’s time to build on it.”