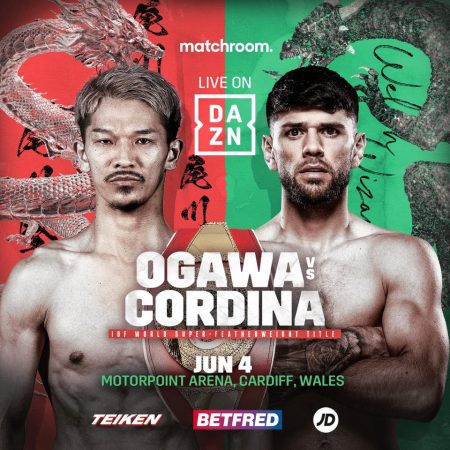 Welshman Cordina (14-0, 8 KOs), a former British and Commonwealth Champion at Lightweight, dropped down in weight to Super-Featherweight after handing his compatriot Gavin Gwynne a first loss at The O2 in London in August 2019.

‘The Welsh Wizard’ captured the WBA Continental 130lbs Title against Mexico’s Mario Enrique Tinoco at the Casino de Monte-Carlo in November 2019 before suffering a hand injury that kept him out of the ring throughout 2020.

Determined to make up for lost time, the now 30-year-old stacked up three wins in an active 2021 – including a stunning first round knockout victory over Chicago’s Joshua Hernandez at Matchroom Fight Camp in the summer – and now sits at No.3 at Super-Featherweight with the IBF.

The 34-year-old from Tokyo is on the hunt for unification fights and represents a sizable step up in class for Rio 2016 Olympian Cordina, having only tasted defeat once in 29 professional bouts – a stoppage loss at the hands of Yuki Miyoshia at Korakuen Hall back in August 2012.

On the undercard, Manchester’s Zelfa Barrett (27-1, 16 KOs), who is ranked at No.2 with the IBF, looks to build on his impressive win over Australia’s Bruno Tarimo on the Parker vs. Chisora 2 undercard when he challenges European Super-Featherweight Champion Faroukh Kourbanov (19-3, 3 KOs) – a former opponent of Cordina.

“I’ve dedicated my entire life to boxing and to putting myself in this position,” said Cordina. “Now it all comes down to this opportunity, my World Title shot.

“It’s a lifelong dream of mine to become a World Champion and a stepping stone to securing my family’s future and making all of the times missed with them worth it.

“I’ll be taking this opportunity with both hands; I’m prepared to do whatever it takes to win and be crowned the new IBF World Super-Featherweight Champion. Be ready to see the best Joe Cordina come fight night as I put my name at the top of the division.”

“First of all, I want to thank Mr. Eddie Hearn for this opportunity,” said Ogawa. “Hello to Team Cordina. I am disappointed that I could not attend the launch press conference but I’m looking forward to fighting in Cardiff. Let’s be in our best shape for this fight. But I will be the one to win this fight. See you in a month.”

“This is it for Joe Cordina – the opportunity of a lifetime and his moment of truth,” said Matchroom Sport Chairman Eddie Hearn. “Joe has an opportunity to become World Champion in his home city and put himself up there with the greats. Ogawa is huge step up, big, strong and proven as an elite fighter. Victory for both men sets up huge unification opportunities – we expect an incredible atmosphere in Cardiff and a great show on June 4.”

“What a brilliant fight this will be,” said Ed Breeze, EVP Rights at DAZN. “Joe Cordina has been rightly tipped by many as a future World Champion and this will be his time to prove it against a very game opponent in Kenichi Ogawa. We are set for a classic in front of a raucous crowd, and you can see it live and worldwide on DAZN on June 4.”

Matchroom Fight Pass members will be able to purchase tickets from midday on Thursday May 5. Priority ticket info has been emailed directly to eligible members.

General Sale tickets can be purchased via StubHub (www.stubhub.co.uk) and via the Motorpoint Arena Cardiff (www.ticketmaster.co.uk) from midday on Friday May 6.