Joe Fournier: I will shock the world and knock out David Haye 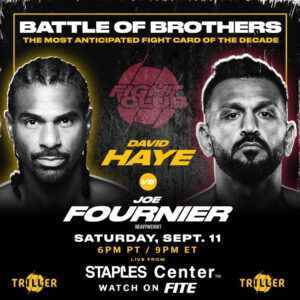 The undercard for “Legends II” also includes the Anderson Silva vs. Tito Ortiz and Andy Vences vs. Jono Carroll. The musical performance will be in charge of the controversial rapper Tekashi 69.

The fight between Fournier and former world champion Haye is scheduled for eight rounds.

“This is not a comeback, this is about teaching Joe Fournier that there are levels to the boxing game,” said David Haye.

All nine of Joe Fournier’s fights have ended in spectacular fashion by knockout. The billionaire businessman recently won on April 17, 2021, by beating Colombian reggaetón Reykon in Atlanta.

“I will shock the world and knock out David Haye,” proclaimed Fournier. “Without a doubt one of the toughest challenges of my life, but this is the perfect fight at the perfect time for me. On September 11, I will be victorious ”.

Fournier began boxing professionally in 2015. He won the vacant WBA international light heavyweight belt by defeating Wilmer Mejía in the eighth round in the Dominican Republic.

Joe is much more than just a boxer. He lost his fortune after his parents’ divorce. He went from having a driver to taking the bus every day. His sports career began as a professional basketball player and captain of the British national team. He left basketball with a severe injury. Then he invested what little money he had left in a small gym. In 2008, he wrote his fitness book “Red Carpet Workout”. Its success is due to strict discipline. He is a family man and an immigrant who started from scratch in the United States.

The matches will be available for viewing around the world on Pay-Per-View.

The British boxer and businessman will open on September 15, the eve of Mexico’s Independence Day, the Bonbonniere Tulum nightclub in that famous Mexican resort.