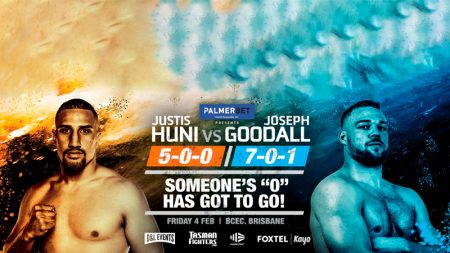 Goodall (28) has spent the past six months in Las Vegas, Nevada, sparring some of the best America heavyweights under the watchful eyes of Taylor Barry who’s in the corner of WBC world heavyweight multi-titlist Tyson Fury.

Both Goodall and Huni had brilliant amateur careers representing Australia in international events. Goodall known for his hard punches had two year’s off boxing for shoulder surgery and had a full recovery winning the Australasia title with an early round TKO decision against Samoan Herman Purcell.

“My shoulder is good,” said Goodall in Las Vegas.

“I have full power and ready to go to the next level,” he added

Goodall will return to Australia two weeks ahead of his showdown with the younger Huni (22) hardened by a training program designed to ensure that he can go the full distance if necessary.

Not to be outdone Huni has flow to USA where he is training under Manny Pacquiao’s trainer of two decades Justin Fortune who has been tasked with supplying a bevy of hardened sparring partners.

The stakes for both fighters couldn’t be higher. A win for Goodall will cement his reputation of a genuine heavyweight contender. A Huni win will see him rise up in the world ranking.

“When all the odds were against him, George backed himself. You definitely need to believe in yourself.”