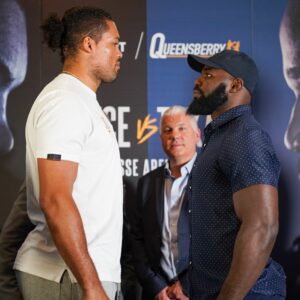 The Putney bruiser is also risking the mandatory WBO World ranking, the position he will move to after Anthony Joshua has defended against Oleksandr Usyk.

Here are a selection of quotes from today’s press conference.

FRANK WARREN “Styles make fights and this is a cracker. Joe will be in the number one WBO slot and he can’t slip up. This is like a World title for Joe because he cannot afford to lose. Joe has caught on and on the cusp of doing something really good. I am looking for him to make a statement where people say, ‘This fella can win a World title.’ The Heavyweight scene at the top end is still a mess. Arbitration stopped Tyson Fury fighting Anthony Joshua, Tyson’s fight with Wilder is pushed back until October and AJ and Oleksandr Usyk fight in September. The next wave of Heavyweights are now in position. If Tyson and AJ come through their fights everyone wants to see them get it on, but providing Joe wins on Saturday the winner (AJ v Usyk) will have to fight him or vacate. Joe’s whole career is at stake on Saturday. Hamzah is a tremendous young talent, but still has a way to go and I believe we will get a good performance.  You look at the size of Hamzah and he is deceptive. What I like about him is he has a fantastic jab and a really good boxing brain. But for a tall, rangy guy he fights well inside. You don’t usually see that with rangy guys. I expect him to go a long way.”

JOE JOYCE “Training camp has gone really well, off the back of possibly fighting Usyk. I have had great sparring. I am in a good place, he (Takam) is in a good place. We’re gonna have a car crash on Saturday night. It is going to be exciting and I am going to win. It feels good to be getting the number one position. I expected it but it is good to have been confirmed. I have a big test against Takam so I can’t look too far ahead. I need to beat Takam up, make a statement and go on to win a World title. I don’t want to jinx it but I have faith in my ability. Takam always comes with his best, but I am going to get the job done. I don’t think Carlos will go the distance.”

SAM JONES (Joyce’s manager): “Joe has boxed all over the World against top class opponents. Carlos is another one. With the WBO ranking at stake I expect Joe to be more spiteful on Saturday. Carlos will come forward. He is a decent boxer who is strong, is dangerous with the head and it’s going to be a tough fight for Joe, But, Joe’s best beats Carlos Takam’s best seven days a week. If Carlos comes and swings the fight will end early. I have been getting the morning report and I’m told Carlos is sparring well.”

CARLOS TAKAM “Fans are going to see the best Carlos Takam and I am ready like never before because I have had two months to get ready. This is my time because my preparation has been very, very good. I was happy in training and I’m winning. UFC Heavyweight champion Francis Ngannou is my brother, my friend who has sparred with Joe but it was a long time ago they sparred. He said Joe was strong, good but not technical. Francis and myself have spoken about being World champions at the same time. He is at home supporting me and told me it is my time against Joe. I have the power to hurt him. This fight is war and not easy for either of us.”

JOE DEGUARDIA (Star Boxing, Takam’s Promoters): “This is a fantastic opportunity and Carlos is looking to upset the apple cart. Frank is a friend, but I am here for Carlos. It’s a bit like when Tommy Morrison was going to fight Lennox Lewis and he got knocked out. This is our opportunity to jump in that position where Joe is going.”