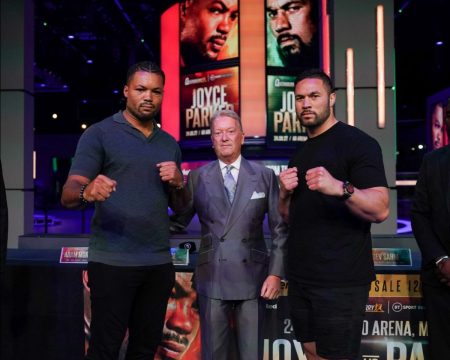 Joe Joyce went head-to-head with Joseph Parker today at the kick-off press conference ahead of their 24 September clash at the AO Arena, Manchester being shown exclusively live on BT Sport Box Office, promoted by Frank Warren for Queensberry Promotions in association with BOXXER.

The fighters traded verbal jabs in a media conference headed up by promoter Frank Warren of Queensberry, Adam Moralee of S-Jam (Joyce’s manager) and Ben Shalom of BOXXER, who represent Parker.

A selection of quotes from today’s opening media event can be found below.

Tickets for ‘Nowhere to Run’ – the heavyweight clash between Joe Joyce and Joe Parker at the AO Arena, Manchester on Saturday, 24 September – are priced from £40 and will go on sale at 12pm on Tuesday, 9 August exclusively from Ticketmaster.co.uk.

WATCH the press conference back via the Queensberry YouTube channel here.

“We have delivered it, we wanted to make the fight and it is an important fight between the WBO No.1 in Joe and the WBO No.2 Joseph. These two are no ordinary Joes, they are two exceptional fighters and I think we are going to get something a bit special on the night. You look at their records, they’ve got fabulous records, with Joe Joyce 14 fights undefeated with 13 KOs and an amateur pedigree which is impeccable.

“Then we’ve got Joseph Parker, a former world champion, whose only defeats came against Anthony Joshua and Dillian Whyte. This is, I think, a big crossroads fight for him. Can he get past Joe Joyce? Nobody has managed to do it yet because he has a fantastic engine in him, a great chin, he is solid and has also got a great punch – and a great workrate, the same as Joseph Parker. We know Parker comes to fight and one thing is for sure here, it will be a great fight.

“It is all on the line and you know why? Because it is such a big prize for the winner. The winner of this fight will become mandatory challenger to the winner of the fight on the 20th between Usyk and Joshua. So they have got everything to gain here, everything is on the line, this is what it is all about. This is heavyweight boxing at its best. It is not just two guys having a fight, there is a prize, a big prize at the end of the night for the winner. It is a massive incentive so these guys are going to put it on the line big time and the fans will get an unbelievable, phenomenal, bonanza fight.

“All anyone needs to know is that it is happening. What went on behind the scenes went on behind the scenes. We all worked very hard and Joe Joyce has been so patient, along with his manager Adam, and we all kept our eyes on the prize and had tunnel vision on this. My son George did all the negotiations with Ben and did a great job and between them we got it on. All that matters now is that these two guys are signed up and will be in the ring on September 24. That is all that matters. All the other stuff is in the past, that has gone, what we have got to look forward to is an absolutely unbelievable fight – a heavyweight bang-up at its best!”

“Now the fight is happening it is giving the fans what they want because it is going to be a great fight and I can’t wait to just knock him out for all this time waiting and all the messing about when we could have had it in July. He was just wasting my time. I think he will try his hardest to hit me and do whatever he has done in camp but, at the end of the day, I am gonna win and knock you out. Little Joe is going to tickle me on September 24.

“I would say I am more like the older George Foreman, the second one who won the world title. I am close to that age now and I am still knocking you out. I back myself, but I am the A fighter and I am entitled to my rematch clause. The fight is on now and I can put some dents into your face. What a night it is going to be, it is the best fight out there and there can only be one winner. The best on the night will be me, preferably. I am really excited for it and it is good I had a fight in between to get me back in the ring after being out a long time. I am excited to be in the best fight, the best shape and really put a dent in his face.”

“I am very excited to start camp with Andy Lee next week and I am going to have the best preparation. There is no reaction to people saying I ducked the fight because we are here now and the reason for that is we want the fight. We have come to an agreement that everyone is happy with. I am going to beat him out, get the win and get out of there. That is what I’m going to do.”

“I’ve been talking to David Higgins about this fight since the end of December 2021 when he told me he had an exclusive period of negotiation with Matchroom which came to an end and we started negotiating. It has been… horrendous, negotiating with those guys. Every time you think it is done, they are like Colombo, just one more thing, just one more thing. Joe Parker is a terrific guy and I know it is not him, it is his team and you do your best for your athlete, I understand that. His team just take it to the extreme and I really thought it meant Joe Parker didn’t want this fight by behaving in that manner. But I think he does want this fight and is true to his world.

“He is a world champion, he is a top level, top class guy and it is an amazing test for Joe Joyce, one he has always wanted. I sat down with Frank and George Warren after the last fight and I said this is our list and Joe Parker was right at the top. Joe Joyce has got to keep proving himself, he has always had to do it ever since the start of his career. He was the guy they all said was too slow and can’t do this and can’t do that. He proves everyone wrong every time. I think most people probably have this as a 50-50 but he will come through this as well.”

“First of all, thanks to Queensberry. I think it was the fight all the fans wanted and when we signed Joseph this is what they were crying out for. I didn’t understand that they thought it couldn’t happen just because he signed with us and I hope boxing can now move in a direction. We know it is very competitive between broadcasters but, at the end of the day, we all work in boxing and want the best fights.

“Joseph Parker wanted this fight the moment he signed for us and we obviously put in that offer that Frank didn’t react to very nicely. That got us talking and we saw eye to eye after that. All we wanted was to make the fight, all Frank wanted was to make the fight and it has been a great experience. We are looking forward to an unbelievable fight and what Frank says is right, there is so much on the line with this one. There is so much money now in heavyweight boxing and for those world titles, so between the two of them now they have got a life-changing opportunity. Obviously Joseph Parker wants to become world champion for the second time and we believe he can.

“He has got the speed, he has got the movement, he has got the experience that I feel Joe Joyce doesn’t have in the professional world. He has been there, he’s done it and he is clearly improving as well. We think this is the perfect fight for Joseph Parker, we think perhaps Joe Joyce has made a mistake in this one and we think his style is all wrong for Joe Joyce. We think it is going to be a difficult fight but, we think over 12 rounds, Joseph Parker won’t get hit much and he will be very, very busy. It is an intriguing fight with a clash of styles as well, but we think Joe Parker has Joe Joyce’s number in this one.”