Joe McGrail: I want to be an exciting fighter 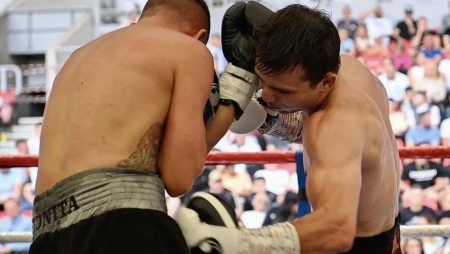 Joe McGrail will always throw punches with “bad intentions” as he strives to become a must-see attraction.

But after his win over Alexandru Ionita, the Liverpool super bantamweight knows he may need to rein in his enthusiasm at times.

The 19-year-old went six rounds for the first time in his career today in Sunderland, out-pointing the resolute Ionita, winning 60-54 on the referee’s scorecard.

McGrail made an aggressive start to the fight at the Stadium of Light, attacking Ionita’s body, and looked like he was set to end the fight early.

But Ionita dug in and though McGrail dominated the fight, the teenager was frustrated he allowed his rival to land a handful of clean shots on him.

“I want to be an exciting fighter; you have got to be if you want to be seen,” McGrail told Probellum.com after his win.

“But it has to be controlled aggression and I have to try and box a bit as well and work on my defence, because you can’t go out and blast them away every time, but I like to let my hands go and throw punches with bad intentions.”

McGrail, who turned professional late last year, is now 5-0 after boxing for the second time in just 15 days.

“I’m happy to get the six rounds in, it’s the longest fight I’ve ever had in my career,” he said.

“My shot selection and punch picking was a lot better than my last fight, and so it was a better performance, in that way, but I took too many shots.

“My brother Peter fought Ionita in Dubai [at Probellum Evolution in March] and so before the fight, Paul [Stevenson, coach] was telling me not to go mad, it’s a hot day and it’s my first six rounder, so he reminded me to pace myself.    I was a little guilty of going too mad early on but I’m still learning.

“I’m learning something new in every fight.”