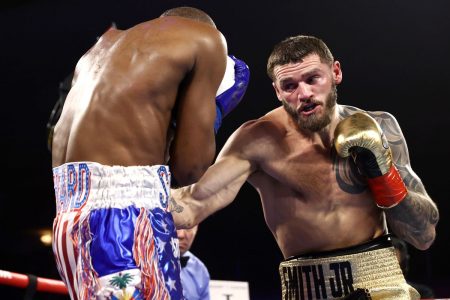 The Steve Geffrard story was something out of a Hollywood script. The South Florida native accepted a shot at the title on eight days’ notice, but he didn’t author the shocking upset. WBO light heavyweight world champion Joe Smith Jr. made the first successful defense of his crown, knocking out Geffrard in the ninth round Saturday at Turning Stone Resort Casino.

Smith (28-3, 22 KOs) was never threatened, as his activity (665 punches thrown) forced Geffrard (18-3, 12 KOs) on the back foot. Geffrard had minor pockets of success in the opening round, but it soon turned into a one-sided exhibition for the Long Island native. He stunned Geffrard with right hands in the fifth and turned up the heat in the ninth. With Geffrard pinned against his corner, Smith unloaded with a combination, and Geffrard went to a knee. Before referee Mark Nelson could finish the 10-count, trainer Kevin Cunningham threw in the towel to end the one-way traffic.

Smith has his sights set on the other division kingpin, IBF/WBC champion Artur Beterbiev. Or perhaps a date with Canelo Alvarez if the pound-for-pound king elects to move up from super middleweight.

Smith said, “He really brought it today. It was a great fight. As you can see, he’s a great boxer, a good survivor. I was trying to get him out of there early, but I realized he was very tough and I wasn’t going to be able to do that. I tried to wait until the later rounds and started throwing more combinations to pick him apart.

“{Beterbiev} is what I want. I want to get back in the gym, work on my craft, and like I say each and every time I get in the ring, I’m going to get better and better. I believe the next time you see me, I’ll be ready for anybody.

“If Canelo wants to come to 175 and fight me, I’m ready for him. That’s the fight I want. Everybody would love to see that fight. It would be a big deal.”