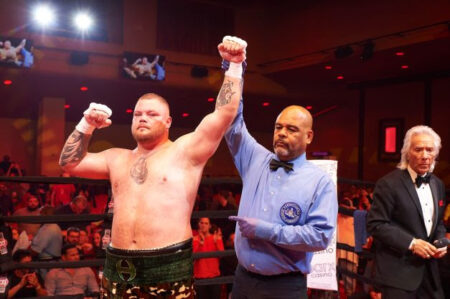 Heavyweight Joey Dawejko won his second bout in five weeks as he won a six-round unanimous decision over Terrell Jamal Woods in the headline bout at Parx Casino in Bensalem, Pennsylvania.

The card was promoted by Joe Hand Promotions.

Towards the end of round two, Fuentes landed a hard flurry of punches that forced a referee stoppage at 2:58.

Fuentes of Coconut Creek, Florida is 8-1 with five knockouts. Ford of Saint Louis, Missouri is 4-1.

In round three, Butt of Philadelphia scored a knockdown and that proved to be the difference on one scorecard as he won by scores of 58-55 twice and 57-56 to raise his record to 12-2. Rodriguez of Front Royal Virginia is 10-17-1.

Alborov scored a knockdown in the first minute of the fight and then finished him off with a barrage of punches.

Nde dominated the action and finished Smith at the end of round.  The time was 3:00 for Nde of Harrisburg, PA who is 3-1.  Smith of Philadelphia is 1-4-1.

Jahqwon Humbert made a successful pro debut with a four-round unanimous decision over Aaron Newmones in a welterweight battle.

JOE HAND PROMOTIONS RETURNS TO THE 2300 ARENA ON SATURDAY, OCTOBER 29TH WITH A BIG NIGHT OF BOXING THAT WILL BE HEADLINES BY SOUTH PHILLY’S UNDEFEATED HEAVYWEIGHT SONNY CONTO