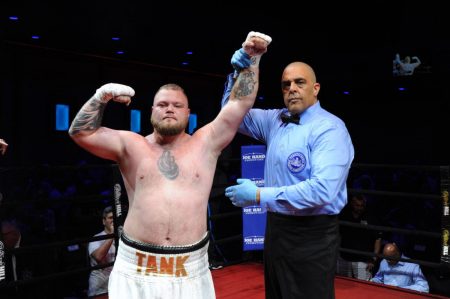 Popular heavyweight Joey Dawejko stopped Mike Marshall in round four of their scheduled six-round bout at The Xcite Center inside Parx Casino.

The eight-bout card was promoted by Joe Hand Promotions.

In round two, Dawejko uncorked a wicked left hook that hit Marshall square in the right side of his head, and he fell on his back. Dawejko landed hard body shots with both hands.

Just after the 10-second clap in round four, Dawejko landed another quick and powerful left hook that sent Marshall down for a second time. Marshall struggled to his feet and the referee Eric Dali waved the fight off at the 3:00 mark.

It was a competitive fight that saw Butt control the action with activity, but Luckey would keep Butt honest by landing an occasional power shot.

In round five, Luckey began to bleed from his nose.

The bout was stopped at 2:45 of round five as Burgos was unable to continue due to an accidental headbutt.

Soslan Alborov and Brendan O’Callaghan battled to a spirited four-round majority draw in a middleweight fight.

Tyler Zwicharowski made a successful pro debut by stopping Andre Hinmon in round three of their four-round middleweight contest.

In round three, Zwicharowski battered Hinmon all over the ring until he put him down with a right hand. Zwicharowski was all over Hinmon that forced referee Shawn Clark to stop the bout at 1:18.

In a battle of pro debuting super featherweights, Devin Gantt stopped Tajiro Arakawa in round three of their four-round bout.

In round three, Gantt hurt Arakawa with a combination and he dropped him face-first with a hard left hand. Referee Eric Dali waved it off at 44 seconds.

Everlon Still won a four round unanimous decision over Derrick Vann in a super middleweight bout.