John Fury: ‘I’ll retire Tommy Fury on the spot if he can’t knock out Jake Paul’ 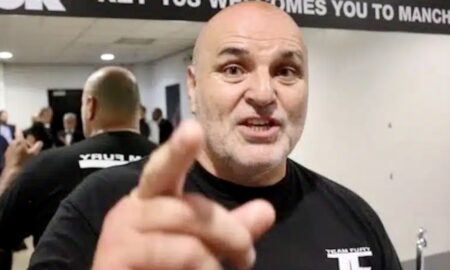 FairBettingSites caught up with John Fury following Tyson’s win over Derek Chisora. He did not hold back with his prediction for Tommy’s future whilst revealing how he’d fare against Paul himself.

John Fury: “Let me tell you this much: if Tommy can’t knock Jake Paul out I’ll retire Tommy from the sport of boxing straight afterwards, I’ll have no more to do with it, I’ll say ‘look, you’re going nowhere’ because I don’t rate Jake Paul at all. I think Jake Paul would struggle with me. If I had a seven week camp now and got the proper sparring and got my weight down, Jake Paul would struggle with me. If Tommy could not knock him into next week – and I mean do a number on him – he has no right looking at conventional boxing at all because Jake Paul would not win a proper amateur fight. He would not beat a decent class amateur. Boxing a man 50-years-old that needs a zimmer frame to get in the ring, come on. Tommy’s a livewire, the fight will be made at 13 stone 3-4 lbs, Tommy’s ideal weight and Tommy can punch as hard as a heavyweight. But can we actually get Jake Paul in the ring? We’re going to find out very shortly because we’ve said ‘ok, yeah we’ll take it, whatever you’re offering, let’s get it on’. He needs to be sorted out, but I don’t think he will because I saw him that day over in Dubai and saw fear in his eyes. He’s not a fighting man. I got within feet of him, looked into his eyes – he ain’t going to want no part of Tommy.”

“Paul’s getting people interested and making money, but when he meets a proper boxer and feels the force of a trained athlete, that’s trained to fight properly, you’ll see what will happen to him. Like I say, if Tommy does not dismantle him, I’ll retire him then and there on that night – and I mean that. Tommy, he’d agree. Tommy is looking to do a number on him from the first bell. The minute Tommy hits him with a right hand or a left hook he’s gone.”

“Jake Paul’s underpaying us but we’ll take an under payment to get him in the ring. We’re trying to put it together now. We’ve said whatever the money is, let’s take it. We’re not bothered. We’re being underpaid, we know that. But we’re going to say let’s get on with it. Whatever the money is he’s got to get Jake Paul in that ring in 2023 and get him knocked out. He knows it. Jake Paul will take some nailing down. We’re up for it, we could not get into America last time. Tommy never even had a camp for him last time and he was going to America. He had three weeks training coming down from 16 stone. But he could not get to America, that put the kibosh on that. Whatever money’s put across we’re going to say yes let’s get on with it. Even though we know we’re getting underpaid by millions of pounds basically because he’s getting all the millions Jake Paul – and we’re the A-side of conventional boxing. He’s crossing over to our side of the road, not the other way around. He thinks he’s the A-side, how is he the A-side when Tyson’s the most popular sportsman in the whole world? What gives Jake Paul to command, say, an 80-20 split because that’s what he’s offering.  Whatever he wants to give Tommy – peanuts – we’re not bothered.”

“I think it could sell out any stadium because Tommy has 5M Instagram followers, the other has millions and millions of followers bringing more eyes to the boxing world, it can be as big as any title fight out there. I think it can be massive.”

“I’d like it to be at Tottenham but knowing them they like fighting abroad where they can get away with certain stuff.  What they can’t get away with in Britain they can get away with abroad. And that’s why they opt to go overseas. We want it at Tottenham. We want it in England but he decides doesn’t he? Because all of a sudden he’s become the A-side. We’re not bothered about who is the A-side or the Z-side, we’re willing to follow him all over the globe to get him in the ring. Whether London or Saudi Arabia, the only place we can’t do it is America because we’re not allowed there.”

“Saudi has shown interest in every other big match haven’t they, so why not this one? A lot of big fights end up over there don’t they. It would not surprise me if Usyk and Tyson ended up over there. They’ve got pots of money to throw around don’t they?  It’s prizefighting so you go where the money is, but I’d like to see these fights in Britain. Tyson and Usyk at Wembley. I’d like whatever happens with Tommy and Paul in the UK as well. Both stadiums.”

“He just kept trying; he was willing to die in the ring. And I think Tyson showed him a bit of mercy because of the punishment the man was shipping. For one one human being to take all that – he’s on the border of a superhuman being. I just hope he’s alright afterwards.”

“It was intentional [to target the body not the head] because Tyson’s not a spiteful guy – he just thought no man can keep taking these full shots full in the face and all round the temple without sustaining lasting damage, so I think he went to the body on purpose to save him more punishment. Really he was expecting the referee to save Derek. It should have been done in my eye two rounds earlier at least. If he’d been my fighter I would have said after six rounds ‘we’re not winning the fight’; let’s go home and come back another day’. Because Tyson is too good for him in every department. He was shipping too much punishment and his corner should have shown him some mercy and some sense as cornerman and pulled him out four rounds earlier.”

“Absolutely do not [want to see Chisora back in the ring] he’s given his all to the job. He’s no more to prove. He stands alone in the bottle and guts department on the trying side of things. Enough is enough. He has a family and he must value his family more than boxing. If he was my fighter I’d say no more and draw the curtains down on his career.”