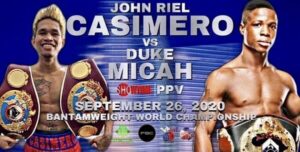 Fight Notes: Micah down in round two. Ref Steve Willis stopped the fight at 0:54 of the third round. The bout was made at bantamweight. 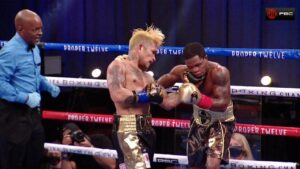 Casimero said, “I worked hard and got the win tonight. In the first round I saw the body shot hurt him and thought I could get him out right away, but he’s a good boxer who was undefeated for a reason.

“The second round the uppercut hurt him, but Duke Micah works hard, he’s strong and has a good chin. I knew I was facing a good fighter, so I didn’t expect to knock him out so fast. He’s strong so I was prepared to go all 12 rounds.

“I’m the real monster. Naoya Inoue is scared of me. You’re next. I would have knocked out anyone today. If Inoue doesn’t fight me, then I’ll fight Guillermo Rigondeaux, Luis Nery, or any of the top fighters.”