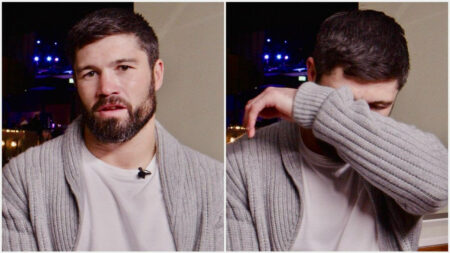 John Ryder has revealed the horrors he experienced in continuing his attempt to become successful as a middleweight fighter before ultimately rejuvenating his career at super middleweight.

Ryder takes on Zach Parker for the WBO Interim world super middleweight title at The O2 on November 26 in a highly-anticipated domestic clash, live on BT Sport, where the winner will either fight Canelo Alvarez for the full title or be elevated to champion.

Currently a picture of health and happiness, Ryder is readying himself to go to war with the unbeaten Queensberry man Parker, but it was a different story down at middleweight, where the principal battle was against the scales.

It was in his 2015 British title challenge against Nick Blackwell that Ryder began to realise that toiling down to 160lbs was having a detrimental effect on his fistic fortunes.

“It just wasn’t there to happen for me anymore, I’d get to 11st 10lbs and then it was just pure dehydration,” explained Ryder to Dev Sahni in a compelling episode of the Unibet Lowdown. “I can’t sit in a sauna even fully hydrated, not my cup of tea, so it was just working hard to get weight off, skipping, running… Moving up to super middleweight was the best thing I’ve ever done.

“The Nick Blackwell fight was the first where I really struggled. I’d been in America and had a bit of jetlag and I probably wasn’t professional enough to say to Tony (trainer, Sims) about training a little bit later. I paid the price for it.”

Ryder went on to relay the incredible thoughts that ran through his head during another domestic collision, this time against Jack Arnfield in 2016.

“I had another crack at middleweight against Jack Arnfield and he just got the better of me. In that Arnfield fight I was thinking ‘please just put me out of my misery’. I wanted him to knock me out because there was no way I was going to quit.

“I wanted to be hit on the chin, put out of my misery and then look for something else to do. I just didn’t have the fight in me anymore.

“I trained like a beast and I always trained hard. I am always fit but getting down to that weight just took something out of me. It just wasn’t there and 24 hours wasn’t enough to replenish it and come again.

“People probably think I am a bit sadistic for saying all this, but it was tough. You’re in a fight and nothing is working for you, nothing is coming off and you are getting picked off. You think to yourself ‘another four rounds of this… I’m not going to quit, so please put me out of my misery’.

“The move up to 168lbs took the pressure off and I enjoyed camps not having to worry about that last bit. Before I was purely training to make weight, not even to get fit.”

Tickets for Zach Parker vs John Ryder for the WBO Interim Super-Middleweight Championship on 26 November at The O2 are on sale now, available from axs.com