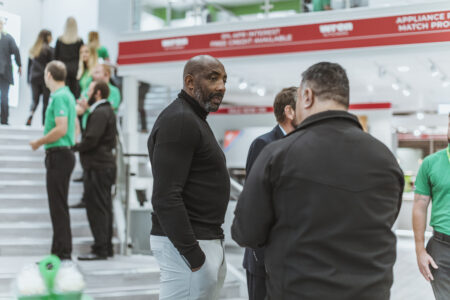 JN: Tyson Fury doesn’t have many weaknesses, and this is the problem, he is an all-round fighter. Mentally he plays that game well before he gets in the ring and puts it out like foreplay. He plays the game well, and he can fight, and I don’t just mean box, he can fight. He is an all-rounder.

Interviewer: Tyson Fury recently said that Joe Joyce is the second-best heavyweight in the world at the moment. What are your thoughts on that comment?

JN: He’s [Fury], trying to undermine everybody else around him, but Joe Joyce is like a George Foreman, he looks so easy to hit, but he’s not. He looks so cumbersome, so slow, but he’s not that slow and that’s why he’s got the wins, because people underestimate him.

He is that kind of guy, where he would be stood in front of you, and you could get two shots or three shots or four shots off instead of pacing yourself, but that’s the only way you beat him. You’ve got to pace yourself and pick pocket him because he’ll make you work at a pace you don’t want to work at.

Joe Joyce is a good fighter, and he is a very underrated fighter.

Interviewer: In your opinion, who, at the moment, are the top three heavyweights in the world? Obviously, all the discussions around Fury, Joyce, Joshua, Usyk and even Deontay Wilder are getting back in the mix.

JN: And those names you just named there are the top fighters out there at the moment. You know, Deontay Wilder, if he is back in the mix, we will see what his motivation is. This guy is worth a bill so why would he do it? What’s his motivation? Especially if Tyson Fury is still around.

Anthony Joshua’s motivation to fight is only Tyson Fury because he knows that Usyk will beat him nine times out of ten. So, the fighters that are there are, Deontay and Tyson, and definitely Usyk and Joe Joyce. And there’s a lot of young ones coming through now.

Interviewer: So if you had to give a top three?

JN: Top three, I would say Usyk, Tyson Fury and I want to say Joe Joyce, but we haven’t seen him in deep enough yet to say, so Anthony Joshua – they’re the top three.