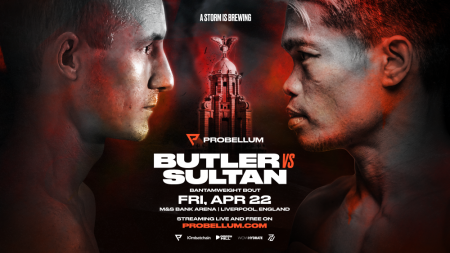 With John Riel Casemiro being forced to pull out of facing Butler for the second time in the space of a few months, his Filipino countryman Sultan has been mandated to step up to fight for the interim bantamweight world title by WBO.

The exciting Sultan – nicknamed One Punch – is unbeaten since his move up to bantamweight last year, also knocking out American Sharone Carter in August.

Speaking about the fight, Sultan said: “This is a big moment for me and I am hungry for it. There is a lot of hard work that has gone into my preparation and it was meant to be that I get in the ring against Butler this week.

“I will be dedicating this fight to my friend Ali Tazeem who tragically died last week. I have been training with him since we came over to the UK to prepare for this fight and I am 100% focused on bringing the belt home to his family when I win on Friday night.”

Local favourites Jazza Dickens, and brothers Peter and Joe McGrail complete the home interest in a night sure to entice a partisan local support in one of Britain’s boxing hotbeds.