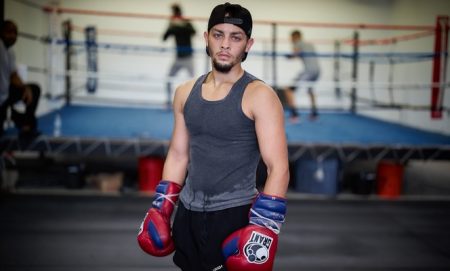 This Friday night, popular and local bantamweight Jonathan Rodriguez will take on tough veteran Oscar Vazquez in the main event of a tremendous night of professional boxing on Friday, September 23rd at The Wind Creek Events Center in Bethlehem, Pennsylvania.

The card is promoted by King’s Promotions.

Rodriguez of Bethlehem, has a record of 10-1-1 with three knockouts. The 23 year-old is a four-year professional, and will be looking for his biggest win of his career, and doing it in front of his hometown fans.

This will be his fifth appearance at The Events Center, and he is coming off a six-round unanimous decision over Jose Flores Canez on March 11th at The Wind Creek Events Center.

Vazquez of Sun Valley, Nevada is 15-3-1 with three knockouts. The 35 year-old has a win over Jose Toribio (6-1), and is now looking to get back in the win column after losing a unanimous decision to undefeated Ja’Rico Quinn on January 17, 2020 in Sloan, Iowa.

A slew of King’s Promotions undefeated prospects will be featured in undercard bouts.

In a eight-round lightweight co-feature, surging lightweight James Bernadin takes on an opponent to be named

Bernadin of Lancaster, Pennsylvania is 7-0-1 with four knockouts. The 29 year-old has been matched tough and has come through with flying colors as he has defeated Osvaldo Morales (4-0), Edgar Torres (8-2-1) and his bout when he took a unanimous decision over Kenny Robles (9-1) on May 20th in Philadelphia.

Also in an eight-round bout will be undefeated junior middleweight Joseph Jackson taking on Anthony Lenk.

Jackson of Greensboro, North Carolina is 17-0 with 13 knockouts. Jackson, 33 has defeated Monreco Goldston (5-0-1) and a nationally televised win over Derrick Colemon Jr. (11-0). In Jackson’s last bout, he stopped Terrance Williams in the opening round on June 5, 2021 in Philadelphia.

Also in a six-round bout, undefeated light heavyweight, Joseph George (11-0, 7 KOs) of Houston, Texas takes on an opponent to be named.