Jordan Reynolds Excited to Show His True Self on Pro Debut 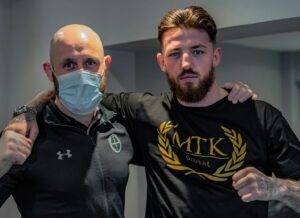 Jordan Reynolds plans to show the world the two sides of his uniqueness when he makes his professional debut on this Friday’s huge #MTKFightNight.

Reynolds enters the paid ranks for the first time when he faces former Southern Area title challenger Robbie Chapman (6-6) at the University of Bolton Stadium, live on ESPN+ in association with Top Rank, and worldwide on IFL TV.

The 25-year-old from Luton had an tremendous amateur career, winning numerous accolades and representing Team GB. He is also known for his fantastic personality outside of the ring, and he is determined to show that, along with his incredible boxing skills against Chapman.

Reynolds said: “Nowadays everyone is doing the same old thing, they’re coming out to rap music and scared to be themselves. I want to come out and entertain and show that it’s right to be yourself and own it.

“I got the nickname ‘The Wanderer,’ and it’s a bit of 50s what I like. I might be a normal geezer outside of the ring, but when I’m in the ring I’m a savage.

“When I’m in the ring that’s where I leave everything on the line. I’m not one dimensional, a lot of fighters only have plan A, but I’ve got plan B, C and D.

“I can box, I can fight and have a war, and I have a big heart. When times get hard I can grit my teeth and bite down on the gum shield and have it out. Times like this separates the weak from the strong, who has been on it and who hasn’t.

“I’m excited to put on a good performance and showcase my skills, and you’ll see a discipline and mature Jordan Reynolds on Friday.”

Vergil Ortiz: A Win Over Hooker Opens a Lot of Doors Viktor Kotochigov: I’ve Set Myself Some Ambitious Goals