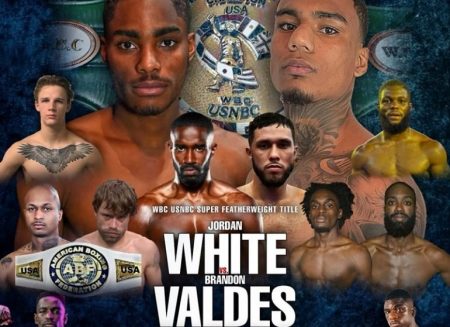 This past Saturday night, surging super featherweight Jordan White won his 9th consecutive fight with a 10-round split-decision over late-replacement Brandon Valdes to capture the WBC USNBC title in front of yet another capacity crowd at The HALL inside Live! Casino & Hotel in Hanover, Maryland.

The exciting card was the 7th consecutive top-notch card promoted by Jeter Promotions at Live! Casino.

In round five, White dropped Valdes with a left hook to the head. The action was nip and tuck throughout the fight with Valdes trying to make a slugfest out of it. White came home with the victory by taking two cards by scores of 97-92 and 96-93. Valdes won a scorecard by a 95-94 tally.

Nicholson dropped Pham with a left hook in round one. Nicholson continued his domination, and in round five, put Pham on the canvas for the count that was courtesy of a hard right hand.

Carroll seemed to take a misstep that caused an injury to his leg. With Carroll limping around, the fight was stopped 62 seconds into the contest.

Conde jumped all over Phillips and dropped him. The fight was stopped quickly after a count started.

Conde is 5-0 with four knockouts.

There was a lot of holding, shoving and illegal tactics until Hutcherson was deducted a point in round in the final round, but he had done enough to take every round and won by scores of 39-36 on all cards to move to 4-1. Woodmore is 0-2.

Thyler Williams of Philadelphia stayed undefeated with a six-round unanimous decision over Maurice Anthony in a welterweight fight.

Ahmad Muhammad Jones stopped Tyree Arnold in the fourth and final round of their welterweight fight.