Jorge Linares: This Is A Different Level For Haney 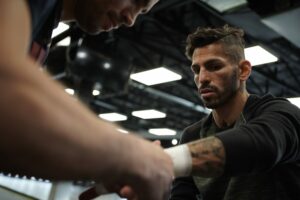 The 22 year old champion has admitted that the Venezuelan star is the toughest fight of his career and has vowed to prove that he’s the man to beat at 135lbs, but Linares believes that he has the goods to end the rising star’s title reign and return to the summit on Saturday.

“It’s a big fight and a new challenge for me,” said Linares. “I have a lot of respect for Devin. He’s a young guy, a World champion, but on Saturday the respect goes, and I am ready for an amazing fight, and I hope he’s ready too. He knows who he is fighting – a four-time World champion. I have a lot of experience and that’s the most important thing in this fight to win the fight. He doesn’t have that. He has talent, he has youth and hunger, and the belt.

“A fight with me is a different level. I can show so many styles, I’m naturally fast and strong, I don’t have a lot of KOs, but he knows I can punch. I think he will run all night, but I will be waiting for him, I will follow him. If he wants to fight inside, I am ready for him. He’s going to have big problems on Saturday night, he knows I can do everything, and he knows I have to timing to put him down.

“I know his style, I trained with him a long time ago in Vegas and we did some sparring. He was a baby then! But he’s a champion now and I hope he’s ready for a tough fight.

“I don’t need to say anything about what he’s said. I just think about myself and what I need to do, not what he says or does. I don’t like to talk too much, I don’t need to talk to get fans or followers or anything, I just need to go out and do my job and put on a great fight.”

There’s a professional debut on the card for Eddie Hearn’s latest American signing, Khalil Coe, Reshat Mati (9-0 7 KOs) enters double figures in the pro game on the night, Ramla Ali (2-0) has been impressive in her two fights since turning pro in October and the first pro female fighter from Somalia gets an introduction to American fight fans on the bill, a card that is rounded off by Devin Haney Promotions’ Amari Jones (1-0 1 KO) fighting in the paid ranks for the second time after his debut in April.