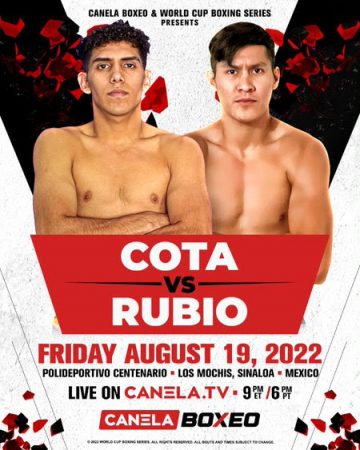 The next generation of Mexican boxers is developing and one of the leaders is 20-year-old super lightweight Jorge “Jorgito” Lugo Cota (8-0, 6 KOs), the latest member of Mexico’s famed fightin’ Montiel family, who will be fighting at home August 19th on the next installment of the “Canela Boxeo” series, presented by CANELA BOXEO, and World Cup Boxing Series (WCBS), led by CEO Terry Hollan and promoter/matchmaker Guy Taylor, at Centennial Sports Center in Los Mochis, Sonora, Mexico.

“Canela Boxeo” will be held and streamed live for free the third Friday evening every month, starting at 9 p.m. ET / 6 p.m. PT, in Mexico.

“I feel very happy to fight in my city, Los Mochis, with my people and family,” Cota said. “I am ready to give a great fight for all the fans and friends. I’m not concerned about fighting in my first scheduled 8-rounder.I feel happy. It’s not something that worries me. I really want to fight and, if the fight goes the distance, I’ll be ready.

“I don’t feel pressure (as a member of the Montiel family), to the contrary, I feel well supported by one of the best teams in the world. I know if I give my best, the result will be positive. I’ve learned many things from my family: work hard – we always work hard in the gym – discipline and, above all, a winning mentality.

“Fighting on Canela.TV will be very good for me so that people throughout the United States and all of Latin America can watch me fight for free. I saw the last event they did in Hermosillo, and it looked very good. I feel very motivated to get into the ring.”

WCBS isn’t concerned about pushing Cota too fast, according to Taylor, who commented: “Jorge isn’t your typical stereotype of what a ‘Mexican fighter’ should be. He’s very elusive with great defense and countering abilities. Jorge has yet to lose a single round during his young pro career.

“I’ve always been known as an aggressive matchmaker, but this might be too aggressive, even for me. We (WCBS) have total confidence in Jorge and the Montiel family. A victory over a former world title challenger on Canela Boxeo will be a huge statement to the boxing world.”

“I don’t know too much about my opponent,” Cota added. “I know that he fought in Los Mochis last year and for a world championship, but I’m not used to seeing my opponents. I do what my family tells me to do in the ring and gym. I’m going to knock him out, probably between the fifth and seventh rounds.”