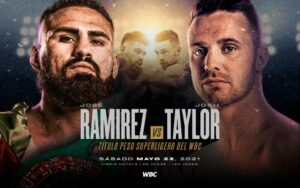 WBC champion, José Carlos Ramírez, pride of the Central Valley of California, will face the Scottish champion Josh Taylor, next Saturday, May 22 in Las Vegas, presented by Top Rank, which will be broadcast on ESPN.

Ramirez (26-0, 17 KOs) has been a world champion since March 2018, when he toppled Amir Imam via unanimous decision to win the vacant WBC strap. Following the Imam victory, he hired noted trainer Robert Garcia, and the duo has combined to go 4-0 in world title fights.

Ramirez knocked out Maurice Hooker in July 2019 to unify world titles and defended his belts last August. Then with a majority decision over former world champion Viktor Postol. Ramirez, a proud son of Mexican immigrants who hails from Avenal, Calif., is an agent of social change in his community.

Like Ramirez, Taylor (17-0, 13 KOs) fought as a lightweight at the 2012 London Olympics, where he advanced to the Round of 16. While he didn’t turn pro until 2015, “The Tartan Tornado” won the Commonwealth 140-pound title in only his seventh pro bout.

Taylor toppled Postol by unanimous decision in 2018 and won the IBF world title the following year with a decision over Ivan Baranchyk. He unified the IBF and WBA titles in October 2019, edging Regis Prograis by majority decision in a brutal showcase masterpiece.

He made his first defense as a unified champion last September, blasting out mandatory challenger Apinun Khongsong in the first round. Taylor draws on this to etch his own history, as the first undisputed, four-belt Scottish champion.

Both fighters submitted their 30-day pre-weigh-ins. Ramirez weighed 146.1 pounds, while Taylor posted 147.2 pounds. The WBC recognizes the professionalism of both warriors for fulfilling this important commitment.

Pawlak Defeats Arifogullari & Boxing Results From Germany Kieron Conway: I’ve Learned A Hell Of A Lot About Myself