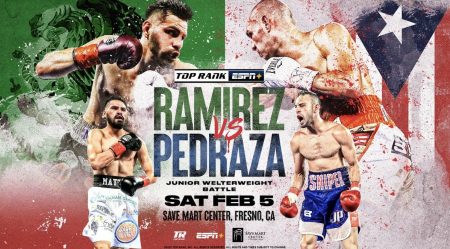 Promoted by Top Rank, tickets starting at $36 go on sale Monday, Dec. 20 at 10 a.m. PT and can be purchased at Ticketmaster.com.

“Jose Ramirez has always demanded the biggest challenges, and he’s back in there with a tough former champion in Jose Pedraza,” said Top Rank chairman Bob Arum. “There are few more exciting atmospheres in boxing than when Jose fights in the Central Valley. The fans there love Jose, and he embodies the region’s blue-collar work ethic. I am also delighted that the Central Valley’s next superstar, Richard Torrez Jr., will make his professional debut in front of a sold-out crowd.”

Ramirez (26-1, 17 KOs) returns to the ring for the first time since May’s decision defeat to Josh Taylor for the undisputed junior welterweight title. Ramirez had made four title defenses since winning the WBC crown in 2018, and he unified the WBC and WBO world titles the following year with a knockout win over Maurice Hooker. Ramirez has drawn 65,794 fans through five headlining fight nights at Save Mart Center. When he fought Jose “Chon” Zepeda at Save Mart Center in February 2019, 14,034 fans — an attendance record for boxing in the arena — turned up. Pedraza (29-3, 14 KOs), from Cidra, Puerto Rico, is a former junior lightweight and lightweight world champion who has won three in a row since a decision defeat to Zepeda. He is coming off June’s eighth-round knockout over the previously undefeated Julian “Hammer Hands” Rodriguez.

“I am motivated to become world champion once again, and it begins with a tough fight against Pedraza,” Ramirez said. “There are no better fans than the ones who pack the Save Mart Center every time I fight. The Central Valley is my home, and it is always a great honor to perform for my people.”

“This one is personal to Ramírez,” said Rick Mirigian, Ramirez’s manager. “This is the fight that puts him back at the top of the sport and in line for the biggest fights.”

Pedraza said, “The new year will bring a big opportunity to battle against a former world champion like Jose Ramirez. This fight is very important for me because I know this will be the fight that will give me the opportunity to win a world title in a third weight division.

Torrez made history as the first American Olympian to medal in the Super Heavyweight division since Riddick Bowe in 1988. Last month, he signed a long-term professional contract with Top Rank. Torrez was a U.S. National Championships gold medalist in 2017 and 2018, in addition to capturing three U.S. Youth National titles from 2014-2016. He went 154-10 as an amateur, and after a long international career in the unpaid ranks, he returns home for his pro debut.

“I can think of no better place to turn pro than in front of my Central Valley friends and family,” Torrez said. “They’ve supported me my entire amateur career, and I am thrilled that they will see the start of my professional journey. Let’s show everyone what it means to be valley grown!”