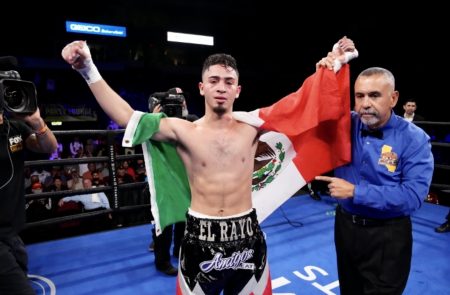 “The game plan was to use my jab, touch him to the body and then finish him up top,” said Valenzuela. “I just stayed patient, took the shots he gave me and landed a good one. I was surprised he fell right away, but he showed a lot of heart.”

Dulay was able to stay tough and remain in the fight, throwing back big overhand lefts that occasionally connected, but did little to slow his opponent. Valenzuela scored yet another knockdown in round two, with another combination to the head, hurting Dulay, who was again able to get to his feet.

After Dulay continued to sustain punishment in round three, the referee stopped the fight in between rounds at the suggestion of the ringside physician. The stoppage officially came two seconds into the fourth round.

“I was surprised by the stoppage,” said Dulay. “I was starting to pick it back up and tag him with some shots. I rocked him with an overhand left at the end of the last round. Then they didn’t even give me an opportunity to fight.”

“I wasn’t surprised by the stoppage,” said Valenzuela. “I was going to stop him eventually and seriously hurt him. It was only a matter of time. I showed everyone that I’m a solid fighter and that I’m here to stay. I believe I’m the future of this game.”