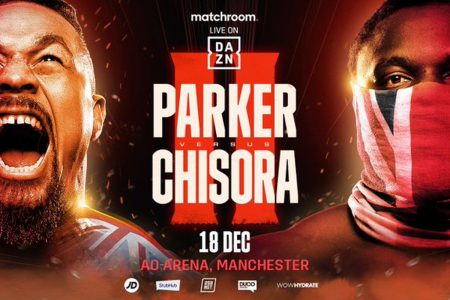 Results in running order and are UP TO THE MINUTE as they happen:

Fight Notes: The bout went the full 6 round distance with Dixon winning on the referees scorecard of 60-54

Fight Notes: Budziszewski came out close and aggressive to try and negate the long levers of Thompson but was soon dropped from a jab in the opening round. He rose but was caught high on the head and was down again and out for the referees count for a KO victory for Thompson. Time of the stoppage was 0:53.

Fight Notes: Ryan caught Capriolo with a powerful hook at the end of round 1. In round 3, Caprio touched down with a standing 8 count given. Later in the same round, the referee finally waved off the bout with Capriolo under fire from the much bigger Ryan. Time of the TKO stoppage was 1:11 of round 3.

Fight Notes: After a round on the receiving end of Nykia’s combination of skill and punch variety, late substitute Carpin retired in his corner at the end of round 1.

Fight Notes: In at 2 weeks notice, the Frenchman came out game. Babic came out throwing hard punches, especially the left hook. In round 2, Babic was caught and after a barrage of punches from Spilmont, the bout was nearly stopped. Round 3, Babic was back and it became a bout of give and take from both, both getting hit and at many points, both looking to go down. In round 4, Spilmont was down and made the count. The bout continued in the same way until round 6 when Babic finally caught up with Spilmont as he went down. Spilmont failed to make the count. Time of the KO stoppage was 0:53 of round 6. Credit to the Frenchman, in at short notice and made more of a fight of it.

Fight Notes: In a bout that was pretty much the same from rounds 1-12, Congora threatened throughout with the heavier punches whilst Richards showed better variety, ring smarts and the key thing, effective scoring. It went the 12 rounds with Richards winning a 12 round split decision by scores of 115-113 & 115-113 against 115-113 that was given to Congora. It was generally considered a decisive victory for Richards but one judge gave it to Congora, who was the aggressor on the front foot. And the new IBO super middleweight champion.

Fight Notes: The pattern of the fight was Tarimo on the front foot, throwing bunces of punches, but Barrett landing the hard counters and controlling the fight from this position. In round 3 Tarimo was down courtessy of a hard left counter. Tarimo made the count. From round 8, Tarimo was tiring and was not on the back foot as much, Barrett on the attack more on the front foot and still landing hard. Tarimo never tried through to the final bell where he finished on the front foot. Barret won the bout by 12 round unanimous decision by scores of 117-110 x2 and 116-111. Barrett was the much taller fighter and Tarimo has mentioned that he may move down in weight where possibly he may be more suited.

Fight Notes: Lelesadjo was boring in, head first, throwing hard punches, whilst Cullen was trying to put distance between the two with his much longer arms. Cullen was cut by an accidental clash of heads but did not worsen over the bout. Cullen was repeatedly getting caught with hard punches and was dropped by a hard left to the body in round 6. He just made the count but the referee waved off the bout with Cullen having a suspected broken rib. Time of the stoppage was 1:11 of round 6.

Round 1/ Parker takes the round landing the most meaningful punches, notably a hard right hand.

Round 2/ Chisora comes out with intent, the fight is alive but Parker is landing heavy and especially on the ropes at the end of the round with Chisora in trouble. Parker very sharp.

Round 3/ Chisora in big trouble to the point of steadying himself in the corner to not go down. Then Chisora is back in it, firing back and even on the front foot.

Round 4/ Chisora at the end of it and given a standing 8 count from the referee. All looks over with Chisora in the corner then Chisora springs to life and goes at Parker landing well.

Round 5/ More toe-to-toe action with Parker having the advantage but with Chisora still in it, game, and fighting back.

Round 6/ More again from both, parker takes the round but Parker appears to be fading, or at least not as strong and quick as prior.

Round 7/ Chisora jabbing well then gets caught and goes down. Chisora just beats the count, takes refuge to the corner then comes to life to have Parker in trouble.

Round 8/ Both very tired but Chisora gets caught again and Chisora is down, only held up by the ropes. Standing eight given and he takes refuge to the ropes again to the end of the round.

Round 9/ Referee was about to stop the with Chisora in big trouble, but, and again, Chisora fires back. Both very tired.

Round 10/ More toe-to-toe action with Chisora still in it, and still both tired. Parker seems ahead on points.

Round 11/ Chisora jabbing with Parker looking for the chopping right. Chisora desperately tired.

Round 12/ Both exhausted, both firing, both trying to end it. It was good to see both made it to the last bell after immense effort from both gladiators.