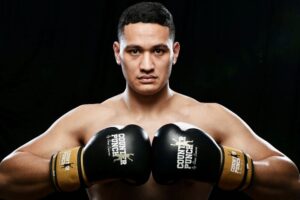 With money agreed between the two camps, the all New Zealand heavyweight clash between Joseph and Junior Fa is headed for December.

They had four fights in total in the amateurs, winning two each. Fa is undefeated though has not fought anywhere near the level of fighters the former WBO heavyweight champion Parker has faced.

Fa spoke to News Hub about their amateur meetings:

“I just played the game smart and moved, because I know Joe is a big puncher and he can also take a punch, so there is no point in me standing there with him,” Junior Fa said. “I just moved around, stuck behind my jab, shifted around him for the whole fight.

“We’re going into the finer details, making sure there is no grey area in the contract. We just want to make sure everything is airtight, so it’s me versus him. I think the first time we fought was back in 2009. The last time we fought was in 2012, before the Olympic trials.

“COVID had different plans that put away a few fights that I had planned for this year to build myself up, but we’re here now, I’ve got to make the best of it. I want to train as hard as I can and then give myself the best chance to beat Joseph Parker. I know a lot of eyes are on me. I’ve got to get down and do the work, and put on a great performance.”