Joseph Parker vs Junior Fa is Finally on For 11th December 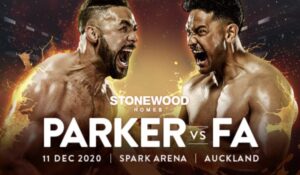 After six months of negotiations, a press conference will be held tomorrow (Tuesday) in Spark City to confirm Joseph vs Junior Fa.

There have been many delays as the negotiations were hampered by money and what gloves are to be used. Finally, no more.

“We’ve finally agreed terms for Joseph Parker to fight Junior Fa, so the fight is on,” Higgins confirmed to Newshub. “This is the biggest boxing event in NZ history. I’m so pleased to see Auckland is going to back to level 1 and it’s so nice to confirm this great event can happen on he same day.

“It’s been a battle of attrition, with each side giving concessions either way, and then also the realisation there there are no other options on the way in the pandemic. Common sense prevailed and we just contractually wrote up a detailed process  around the gloves, so our side was happy and that their side was happy. So, we’re finally there… Parker v Fa is on.”