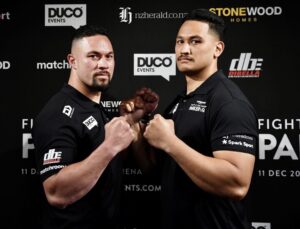 With the lead up to the highly anticipated all New Zealand clash between former WBO heavyweight champion Joseph Parker and unbeaten heavyweight contender Junior Fa, after long negotiations there are further problems already.

“We will not put Joseph in the ring against a guy ranked #6 in the world by the WBO without a proper build-up,” manager David Higgins told the New Zealand Herald. “We went through the correct process to have him designated as an essential worker but that was denied on the grounds his skillset is otherwise available in New Zealand.

“I don’t know if they have anybody in that bureaucracy with boxing expertise but that is simply not the case and we have appealed that.”

Kevin Barry (Parker’s trainer) and Stuart Duncan (matchmaker) have written to the ministry to appeal the case. I’m sure there will be further drama before December 11th.