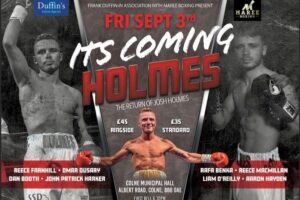 Fight Notes: The bout went the 4 round distance with Holmes winning on points. The the judges scorecard was 60-54.

In-between the 4th and 5th round, the referee had to pause the bout for a sustained period of time as the pro Holmes crowd became over vocal and abusive. What appeared to be a clash of heads in the 4th round resulted in Horabin naturally complaining, resulting in the crowd chanting “you soft b*stard” among other continual abuse from the crowd. This naturally rattled Horabin. With that said, Horabin did reply but understandably so. This seemed to effect Horabin to the end of the bout, with frustration resulting in him nearly kicking Holmes (at least lifting his knee to do do).

Horabin must be respected for coming in at 24 hours notice in a small hall with an over vocal Holmes crowd.

With all this said, Holmes was professional throughout and it is a shame that his win will be overshadowed by the individuals that spoilt it for the rest.

Fight Notes: In a workman-like performance, Macmillan won a 6 round points decision on pure workrate by the referees scorecard of 60-55.

Fight Notes: The bout went the 4 round distance of a competitive bout. Farnhill was all out for the 4 rounds, winning on the referees scorecard of 40-36 (winning every round).

Fight Notes: In a very close bout that went the 4 round distance, Buczynski won by one point on the judges scorecard of 39-38.

Fight Notes: The bout went the distance in a competitive bout. The referees score was 40-36 for a O’Reilly points victory. After the bout, O’Reilly proposed to his girlfriend in the ring. She did say yes!

Fight Notes: Booth put Boothman to the floor via a left hook to the body. Beating the count, Boothman was down again, this time a left hook to the jaw putting him down and out for the ten count. Time of the stoppage was 1:10. Boothman made a unsuccessful pro debut while Booth moved to 5-1 with 2 KOs.

Fight Notes: Henry Wharton trained Benka made it 2-0 with a 4 round shutout of Krajevski. Having gone the 4 round distance, the referees score was 40-36.