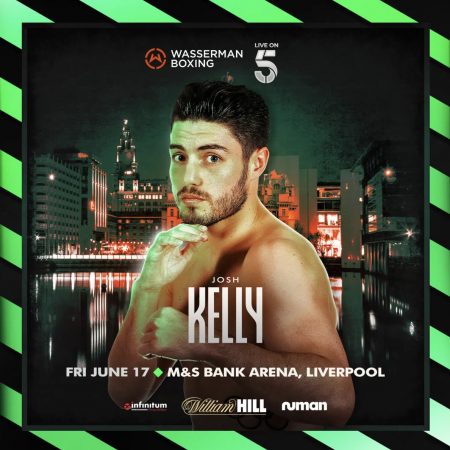 Josh Kelly (10-1-1, 6 KOs) will look to put his name back amongst the division’s best as he makes his long-awaited return to the ring on Friday June 17 at the M&S Bank Arena in Liverpool as part of an action-packed night of free-to-air boxing live on Channel 5.

London had previously come calling for Kelly, and the Sunderland lad accepted willingly to get the capital rocking. However, after vigorous preparations, and through no fault of his own, his opponent pulled out of the fight at the last minute.

Kelly had snarled and bared his teeth all week, hungry to do the business and carrying a steely gaze throughout. All noteworthy deterrents to force his opponent into no-showing, which could be considered a wise move on the part of the opposing camp. Nevertheless, frustrating circumstances for Kelly that were left out of his hands.

“It’s never an ideal situation when you commit to the grind and graft for a whole camp for your opponent to pull the plug at the last minute,” said Kelly.

“It’s not the first, or last, time it will happen in boxing. My job is to prepare and be ready for whoever, whenever; I’ll be leaving no stone unturned come June 17.”

This is bad news for the rest of the division as an even more prepared Josh Kelly awaits them all. Besides having an extra camp under his belt, the opportunity to exert over 12 months of frustration will be something he is also relishing.

“No one wants to be inactive, but you can look at it in a completely different light and use the time to fill the gaps and make all your dangerous assets even more deadly,” he said.

“I can’t wait to give Liverpool, the United Kingdom, and the world the chance to see Josh Kelly at his best again.”

With the carrot having previously been dangled in front of him, Liverpool will be the destination that the former European Games Bronze medallist can finally explode back onto the scene.

“Nothing has changed, I said I was after world titles before and I’m still after them,” Kelly said.

“I’m ready to do whatever, and that starts with a dominant display live on Channel 5 in Liverpool. I can’t wait to give my fans, and all fans of the sport, a masterclass come fight night.”

Kalle Sauerland, Head of Global Boxing at Wasserman said: “For Josh to stick his name straight back into the hat for this stacked Liverpool card emphasises his hunger and desire to be boxing again.

“Josh’s talent is assured in that ring, and the fighting city of Liverpool gets to host it. With over a million viewers on Channel 5 last time, the country will get the opportunity to witness a refreshed and ready ‘Pretty Boy’ Josh Kelly.”

Promoted by Wasserman Boxing, live on Channel 5, in association with William Hill, Numan and Infinitum Entertainment.

Hughie Fury vs. Michael Hunter: It’s on! Manchester AO Arena on July 2 Hamzah Sheeraz returns to the ring in London on July 16