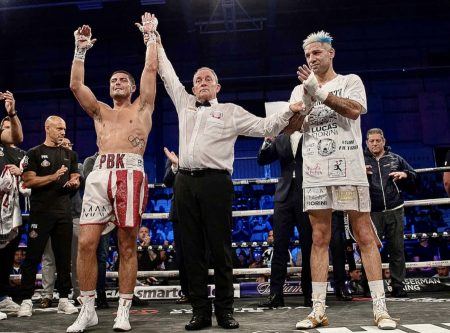 Josh Kelly overcame a tough Lucas Bastida to enter the world rankings and claim the WBO International Super Welterweight Championship. It was a fiery encounter before the bell had even sounded, and after yesterdays weigh-in antics that saw the two main event fighters exchanging words, Bastida walked to the ring in a Newcastle United football shirt to antagonise Sunderland’s Kelly even further.

With his name upon the banners, Kelly did not disappoint the Channel 5 audience and all those in attendance at the Vertu Motors Arena on a fantastic Wasserman Boxing fight night. ‘PBK’ had a job to do as he continued his climb up the rankings, but had clearly been working on all the physical and technical aspects of his game to grind down his Argentine opponent.

“I’ve said i only want to be in big fights, and that kid tonight has only lost once, and that was due to a cut. It wasn’t even a legitimate loss,” said Kelly, live on Channel 5 post-fight.

“He’s a strong Argentine who wanted to push forward, with a marauding style where he tried swinging shots from everywhere. I needed to keep my discipline in there tonight, and that’s exactly what i did.”

The eyes were on the North East fighter fighter even more so when British champion, and potential opponent, Troy Williamson entered the arena with his Newcastle shirt on. Asked about this being the next move for Team Kelly, there was no denying if they did, or didn’t, want this fight.

“We absolutely want that fight. I’m here for all the big fights and that includes Troy,” he said. “I’ve told Adam (Booth) and the rest of the team that it’s a fight we all definitely want to see.”

The post-fight interview between Channel 5, Kalle Sauerland and Josh Kelly was to be quickly interrupted by Williamson, as he gave his opinion on the future encounter.

Hose Stewart vs. Franklin Ignatius was declared a draw